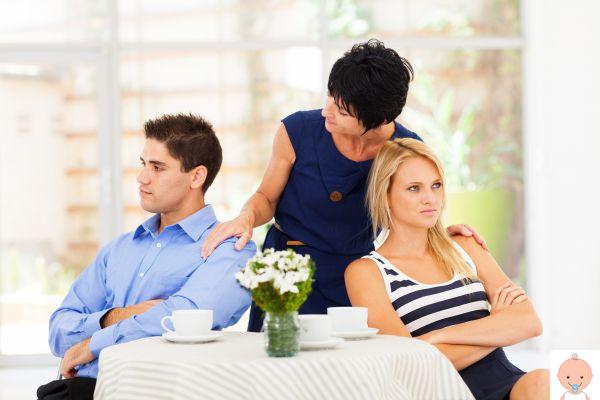 The relationship between daughter in law e mother-in-law it can become a minefield and treacherous, especially after the birth of grandchildren. To laugh it off a bit, we've put together a semi-evening list of 10 sentences a mother-in-law should never say to a daughter-in-law.

The stove would be cleaner if ...
Any negative comment addressed to the cleaning of the house, even if we do not do it ourselves, is almost always badly perceived. More than benevolent advice, it is interpreted as an unpleasant interference, on the wings of the implied "I am better than you".

My son has really lost weight!
It does not matter if in recent years she has put on a nice middle-aged man's bacon, for her her son is perpetually undernourished since she is with us, modern girls who no longer know how to cook like they used to.

Maybe I'll come and stay with you for a while after the baby is born.
Here is one of the most feared phrases, those for which even a half wrong answer can compromise an entire castle of diplomacy built over the years. Yes, because if we are inclined to see the postnatal period as an intimate and delicate period, to be spent as much as possible with the family, the mother-in-law can't wait to "feel useful", stay in our house indefinitely in order to "help us. "... or perhaps to give us the coup de grace after the fatigue of pregnancy and childbirth!

I hope you will need me after the baby is born.
Light version of the transfer hypothesis above, a sentence like this is unhappy to start: I hope you will need it means that you hope we will not be able to manage our baby? It makes us want to die of fatigue before asking her for a hand.

You were born with a shirt!
Our life is easy, wonderful, a flat path compared to the long and winding road that she, a little match girl in the third age version, had to take. She had to work in the fields at the age of six, she conquered everything she has with sweat, she couldn't raise her children personally because she had to work ... We, on the other hand, kissed by luck and never touched by the smallest problems, we have also had the supreme privilege of life as a gift: his son!


My baby likes ...
His child, now on the verge of andropause, likes so much to eat lasagna at least once a week, to find the t-shirts folded in this way, and to serve him coffee on the sofa after dinner, with a teaspoon and a half of sugar already. mixed. Too bad that we gave birth to him, but we are wives, companions, girlfriends, and although we are not stingy with small attentions and tenderness, we remain convinced of the full self-sufficiency of the "big baby"

You won't send him to the nest!
For many mothers-in-law the nursery is seen as a sort of death trap from which every child comes out plagued by all kinds of diseases. But above all, sending him to the nursery means not entrusting him to his loving care ...

You look tired (I take care of the baby)
In addition to the fact that negative physical comments are never a good idea, this phrase is particularly miserable if it is addressed to us within days of giving birth (so sorry about the not-so-fresh and rested look) when we just feel like spending some time. of time with our newborn and not entrust it to a person whom we perhaps perceive as foreign and negative.

The old girlfriends
"Do you remember my son's ex, the tall blonde one with the BMW? I met her, she was so affectionate, she just opened her own business, she has three children and she bought a house by the sea in Sardinia." ... Of course this phrase is addressed to us while we are in our dressing gown after a sleepless night, with dirty hair and in our arms the screaming baby.

We await your comments: qWhat was the worst sentence your mother-in-law ever said to you?