10 things a mom should never say to her little girl 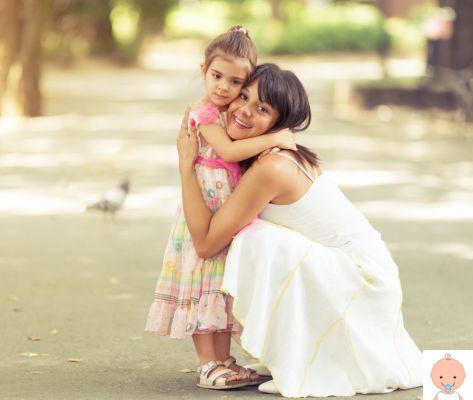 Phrases not to say to a little girl

Even as adults, the criticisms of our mothers demoralize us, or infuriate us, or at least provoke strong reactions in us: it is difficult to remain completely insensitive to the judgment of those who gave birth to us. Let alone for our little girls: we are their world.

So, no slips: sometimes out of distraction, superficiality or bad examples, we come up with inappropriate phrases or ideas.

The Decalogue of the Good Mother

Ten semi-serious tips for moms who aspire to perfection

There are many ways to express a concept that is wrong, and even rather retrograde: from accusing the little girl of "being a tomboy" in a derogatory tone, to scolding her for physical and boisterous behavior by bringing up the story of femininity as the supreme value. She is just a child; maybe she just wants to have fun, experiment, or she is really "a tomboy" and she always will be. In both cases, it is her right to express herself within the limits of civilization and good education.

Read also: Fusion relationship between mother and daughter: what it is and what are the risks

Any child's ambition should always be encouraged: Marie Curie, Margaret Tatcher, Margaret Hack and Queen Elizabeth are just some of the great women in history who have distinguished themselves in "male" jobs.

"You are not beautiful."

Probably no mother would explicitly tell her daughter that she is ugly, but we must also pay attention to half sentences, gestures and attitudes that could make her think that she is not enough; that we don't consider her as beautiful as her little sister, cousin, park friend, etc. Even for a little girl of a few years, it can create wounds that are difficult to heal.

Sometimes we say something like this for a good purpose, to save the child from frustration and disappointment as we see her grappling with a task that is not within her reach. But being unsuccessful is the lesser evil: starting with the preconception of not being able to do it creates a negative thought pattern in her mind. She will soon realize that there are many things she will "never" be able to do, and one day, perhaps, she will stop trying.

"This will make you fat."

With children, great attention must be paid to food in all its aspects, but a healthy diet solves the vast majority of problems. A little girl can eat as much as she wants, up to complete satiety, if there are only healthy, light and nutritious foods on the table. The aesthetic result is only detail: we teach them that eating well is a question of health, not of youth.

Also read: 10 things a dad of a daughter needs to know

Aside from bad words and rudeness, a child must be free to express her opinion, whatever it is: telling her that certain things "are not said" is like guiding her not to have an opinion.

Such a ban is particularly unfair if it does not apply to the little brother or male friends. Children should be allowed to experience: if we think about it, among the best memories we all have from our childhood there are almost invariably jumping in puddles or finger painting! Let's dress her properly and let her live.

"What will the other girls think?"

The child should be encouraged to make her decisions based on what she thinks, not others, and to face the possible consequences of her nonconformity head on.

"The guests are coming, smile!" "You don't want your father to see you with that ugly face!" "You will look just like the capricious child." Being forced to hide your feelings because the situation requires it, it's a pretty depressing aspect of adult life: we all know that hiding a pain or anger behind a fake smile only makes you feel worse. At least as a child, let them free to express their discomfort.

Read also: A letter from a father to his daughter

It is not that a woman (or a small woman) should always be sweet and kind in any circumstance, even if for example she has just been wronged by a peer of the same age. Sometimes it is life itself that asks us to be rude, so as not to be overwhelmed. At least between girlfriends of the same age, let them see it for themselves.