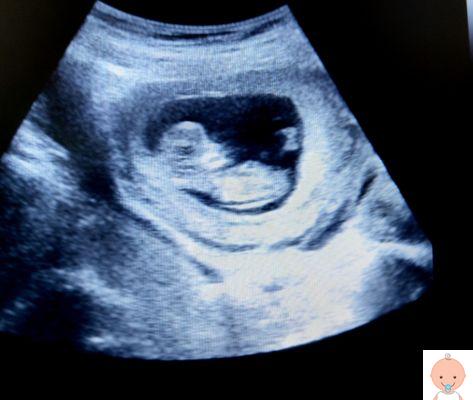 You are almost at the end of first trimester of pregnancy, you may begin to feel better and the morning sickness may begin to subside. The time is approaching to communicate to everyone that you are pregnant because from next week the risk of miscarriage is considerably lower.

Symptoms of the eleventh week of pregnancy

The appetite is really strong: everything is normal, after all you are feeding two human beings, but be careful to eat better and not much more.
You may be really hungry, opt for easily digestible and light foods. Eat carefully, choose the right foods, avoid those that are too fat and heavy, and remember that you shouldn't gain more than 13 pounds during pregnancy and around 1 or 2 kg in the first trimester.

Il heart beats very fast and the pressure increases, you may often feel out of breath. Relax, rest as much as possible, enjoy moments of tranquility.

It is possible that you are starting to have some trouble sleeping at night.
The combination of hormone overload, a constant urge to urinate, pre-maternity nervousness can make even those who have never been sleepless.

How the woman's body changes

La belly begins to swell visibly because theuterus has grown and the first bacon is beginning to appear. L'uterus it is about the size of a round, soft ball and covers the entire pelvis. If until now no one has noticed a change in your body, things will start to change starting this week.

You may begin to notice some changes in your hair and nails that can grow faster under the direct action of hormones.

Read also: Your body in the first three months of pregnancy

How the baby grows in the XNUMXth week of pregnancy

Le bones of the fetus begin to form, as well as the spine. A very fine hair, called fluff, begins to cover the entire body of the fetus. It will slowly disappear after birth.
La forehead it is much larger than the rest of the body and is disproportionate. The brain continues to develop and its shape begins to resemble that of the human brain more and more.
Il fetus weighs about 4 grams.
Her skin it is subtle and transparent and its movements are very active but it is difficult to feel them already. The warbling and movements you hear could be more easily traced back to the gut or gas in the belly.
However i baby's first movements they resemble those of a snake darting in the water or a small fish.

From seed to pumpkin, how big is your baby

Curiosities about the XNUMXth week of pregnancy

Some pregnancy disorders may persist even after the ninth week of pregnancy, such as nausea. Acupuncture, which is a safe practice and can also be effective in preparing for childbirth, can help to relieve them.

Eleventh week of pregnancy, what to do

During pregnancy there is a need for a greater intake of calcium, iron and magnesium. Pregnancy is certainly not a time to go on a diet; said this, if you find that you have gained more than 1,5-2 kg o if you have high blood pressure or hyperglycemia, it may be wise to contact a dietician-nutritionist to set up right now a suitable nutritional regimen.

Between weeks 10 and 14 it is possible to take the nuchal translucency test which is used to assess the probability of possible malformations of the fetus.