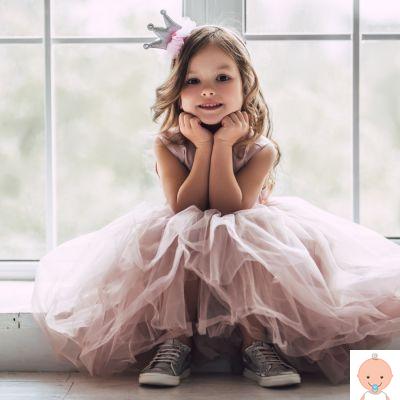 When you discover that a girl is on the way, the choice of the name is always a special moment and there are many names to be inspired by. Names ancient, classic or modern, the country or foreign, short or long. You can be inspired by family names, take a cue from the names of actresses and singers of the past or present, or you can choose from the many names for girls inspired by great women.

Names of women who have made history el paesena, with their art, with their culture, with music or literature, with their scientific discoveries, with their political battles. We take you to discover these beautiful and meaningful names.

Let's start by suggesting the names of three women who have left their mark on history for their courage, their determination, their strength, their faith.

In honor of Joan of Arc, who lived in 1400, during the Hundred Years War. She convinced Prince Charles of Valois that she had been elected by God to lead the French army to victory. At the age of 19, Giovanna D'Arco was declared a heretic and therefore condemned to be burned at the stake. She is still today the patroness of France, a symbol of justice and freedom.

In honor of Margaret Thatcher, also known as the "Iron Lady", one of the most important women in the United Kingdom in the 900s. Margaret Thatcher went down in history for being a very influential woman from a political point of view, leader of the Conservative party, as well as the first woman to become prime minister of the United Kingdom, from 1979 to 1990. A whole era took her name, still today, in fact, the British '80s are nicknamed the "Thatcher age".

In honor of Mother Teresa of Calcutta, a woman of great faith and charity. Founder of the Catholic Congregation of the Missionaries of Charity, Mother Teresa lived for many years in India, taking care of the weakest and sickest. In 1979 she was the winner of the Nobel Peace Prize, she died in 1979. she In 2003 she received the beatification of Pope John Paul II and was proclaimed a saint by Pope Francis on 4 September 2022.

Here are three names for girls that are inspired by the names of great women of the country and world culture. Personalities who have given their contribution in education, cinema, politics with passion, tenacity and professionalism:

In honor of Maria Tecla Artemisia Montessori, known simply as Maria Montessori. Educator, pedagogist, philosopher, but also doctor, child neuropsychiatrist and scientist el paesena, who has brought to us the Montessori educational method, still chosen today by numerous nursery, elementary, middle and high schools all over the world.

In honor of Anna Magnani, one of the most important and loved female performers in the history of cinema and the countryside. Known for her Romanism, for her collaborations with actors of the caliber of Alberto Sordi and Aldo Fabrizi, for her interpretations in the open city, Bellissima, Mamma la città and The tattooed rose which also made her win the Oscar as best leading actress in 1956.

Disappeared in 1973, Anna Magnani has continued to live in all the Romans, in all the villages and remains indelible in the history of our cinema.

Inspired by Leonilde Iotti, known to all as Nilde. She is the politician of the country, the first woman in the history of the republican country to be appointed president of the Chamber of Deputies, a position she carried out for almost 13 years (from 1979 to 1992). Her inauguration speech has remained in history, focusing on the figure of the woman, political impartiality. Among her main battles was the reform of civil laws, with the introduction of divorce.

It can also be a good choice to be inspired by women who have made the history of science to find the most suitable name for their little girl. Among the many, here are the three we have selected:

Among the most famous scientists in the country, there is undoubtedly Rita Levi Montalcini, who passed away in 2022. Neurologist, philanthropist and life senator of the Republic of the country, Montalcini received the Nobel Prize for medicine in 1986. Her discoveries remain still valuable today for studying diseases such as tumors, Alzhaimer and ALS.

Rita Levi Montalcini was a great woman not only for her scientific research but for the charitable commitments she carried out throughout her life and for having always promoted the role of women in society.

Inspired by Marie Curie, a scientist known for her studies, together with her husband Pierre, on radiation and radioactive materials. Her research earned her two Nobel Prizes, one for Physics in 1903 and one for Chemistry in 1911 (after the discovery of radium and polonium).

Marie Curie is an example of a determined woman, passionate about her work. She was the first woman to teach at the famous Sorbonne University in Paris, she passed on her passion to her daughter Irène who continued her studies with her husband Frédéric Joliot, winning - in the footsteps of her mother - the Nobel Prize for chemistry in 1934.

Inspired by Caroline Herschel, a British scientist of German origins who lived from 1750 to 1848. Together with her brother William she managed to discover various comets. Some discoveries attributed to his brother are also said to have been his own.

She was one of the first female astronomers, together with Mary Somerville, to be admitted to the prestigious Royal Astronomical Society.

Art is full of women who have left their mark, with their works but - above all - with their personality, their style, their femininity. We have selected three that might inspire your baby girl names:

Name inspired by Artemisia Gentileschi, daughter of the famous Orazio Gentileschi. Her art is part of the Caravaggio school. The artist lived during the first half of the seventeenth century, in her works the dramatic accentuation typical of Caravaggio stands out but with greater theatrical effects.

An immediate rape, which led to the trial of Agostino Tassi, has made Artemisia a symbol of international feminism, many associations named after it. She was a woman who always went beyond prejudices and obstacles to assert her independence from her.

Frida, inspired by Frida Kahlo, one of the most loved artists in the world. Born in Mexico in 1907, the artist is still today an example of creativity, courage, strength.

Hers was a troubled life that Frida Kahlo represented through her art, especially with self-portraits. In 1925 she was the victim of a serious accident which caused her pelvis rupture, affecting her for the rest of her life. Her pain, her physical and mental pain, the sufferings, the pathos of her life emerge in her painting of her, much loved also in Europe and still the protagonist of exhibitions and events.

Inspired by Barbara Kruger, American photographer born in 1945. Kruger has become famous for her images of women, often recovered from magazines, newspapers, advertisements, to which the photographer has added writings and short texts to subvert their meaning and send a message of reflection on the commonplaces of modern society.

The black and white, the font and the colors chosen are the characteristic features of the revolutionary and direct art that characterized Barbara Kruger.

We end our guide on names for girls inspired by great women, opening a parenthesis on literature and on those el-country and foreign writers who with their novels, their writing style, their sharp, enveloping, passionate pen have made generations fall in love .

The names we have chosen are:

Inspired by Agatha Christie, British writer known above all for her detective novels that have made her famous all over the world. She is considered one of the most influential writers in the world, a world famous mystery writer, the second most translated writer in the world after Shakespeare.

In his works there are recurring characters such as Hercule Poirot and Miss Marple, also protagonists of television and film adaptations.

Inspired by Virginia Woolf, British writer, essayist and activist. She is considered one of the leading figures in XNUMXth century literature, a symbol of the struggle for equal rights between the sexes, a member of the Bloomsbury Group and a prominent figure in the London literary environment.

Mrs. Dalloway, Trip to the Lighthouse and Orlando are among her most famous and best-loved novels. His masterpieces have been translated into over 50 languages.

Inspired by Alda Merini, Milanese writer and poet who passed away in 2009 due to a bone tumor. Talking about himself he said: "I have enjoyed life because I also like the hell of life and life is often hell. For me life has been beautiful because I paid dearly for it".

Alda Merini met poetry when she was little more than a child and poetry met her. But it was alternated, in the course of Merini's life, by repeated hospitalizations in her asylums. She married the baker Ettore Carniti, from whom the four daughters Emanuela, Barbara, Flavia and Simonetta were born. She for twenty years she no longer wrote her, until 1979, when she decided to tell the experience of the asylum. Her poetry received many literary awards and, still today, Alda Merini has remained in everyone's heart, often honored and remembered in events dedicated to poetry