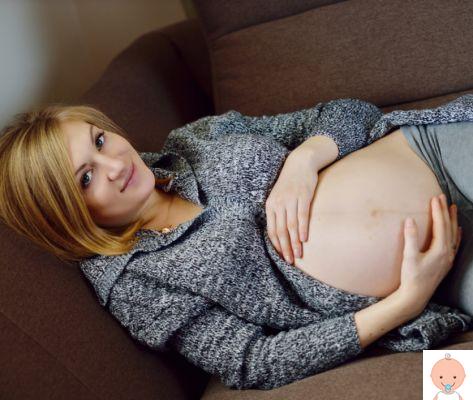 from 32th week of pregnancy the child gradually takes on the features of a real newborn. Between the 30th and 32nd week of pregnancy, the mother undergoes the third and final ultrasound scan before delivery, which is used to check the normal growth of the fetus. The baby is perfectly formed, but if he were to be born now he would still need to be placed in an incubator.

Her skin it is still wrinkled but it is becoming more and more pink. It measures about 41 centimeters and weighs about one and a half kilograms. She has beautiful nails that grow bigger and bigger. she sees the difference between dark and light and begins to sit a little tight in her belly.

Notify regularly with your baby: just caress his belly or pat his hand to stimulate his movement.

Le bones continue to develop and this requires a good amount of calcium that the baby gets from the mother, so make sure you get the right amount of football.

Symptoms during the thirty-second week of pregnancy

During the eighth month you may feel some contractions, if they are not regular don't worry, but if they occur at a regular pace it is good to go to the emergency room.

Vaginal discharge can increase: white losses at this point in pregnancy they are physiological. White losses in pregnancy are called leucorrhoea gravidarum, they are almost dense and are linked to a hormonal shift, i.e. the increase in the level of estrogen.

But beware: if the losses are a lot copious, frequent and uncontrollable, then they could be synonymous with some phenomenon to be kept under control. Sometimes their consistency changes, as does the quantity, they become watery and larger. In this case it is good to consult a doctor, as the waters may be breaking, if we are in periods close to childbirth, they could be synonymous with infection, if they were accompanied by vaginal burning.

The moment of delivery is approaching and you could begin to do many dreams in this regard: maybe funny dreams alternate with distressing dreams.

Your last day of work and maternity leave is approaching. During your eight month visit, your doctor will measure your blood pressure, prescribe a urine test, and check the baby's heart rate.

Call generally ultrasound of fetal well-being, this 32nd week exam is primarily to ensure that the fetus is growing well and in good health.

You may still gain a few pounds. The baby weighs more and this can cause pain in the back, shoulders, and sciatic nerve.
In addition, a stagnation of liquids, varicose veins, swelling of the lower limbs could worsen.

Here are some tips to manage swelling and fatigue in the legs: in the evening it can give relief by massaging the legs with slow and light movements, starting from the ankle to the calf to get to the thigh, perhaps associating the massage with a cream recommended by the specialist. Also useful showers or cold water sponges made starting from the foot and going up to the knee or a bath with a spoonful of bicarbonate, which has an anti-fatigue action.

Read also: Gelatinous leaks in pregnancy: what do they mean?

What exams to take

Starting from the 32nd week, it is possible to undergo fetal flowmetry, a non-invasive and non-mandatory examination, similar to ultrasound, which allows to verify the correct blood circulation of the fetus. It is especially done when there are suspicions of blood flow malfunction, which could complicate delivery.

32 week of pregnancy, the curiosities

Pregnancy is a favorable period for the formation of fungal infections such as Candida albicans.

About one third of women complain of frequent vaginitis during pregnancy. Candida represents an affliction for the pregnant woman but the greatest concern that women express is the possible danger of theinfection for the fetus. Actually the candida itself does not cause damage during gestation, however, there is the possibility that the baby at the time of delivery may catch the infection by contact and develop candidiasis of the oral mucosa which in the infant is called thrush.

If you notice whitish discharge and itchy skin, ask your doctor: just follow the gynecologist's instructions and promptly treat candida during pregnancy with topical treatments.

If you want to know more about the others 40 weeks of pregnancy,  has created a nine-month calendar with advice on health, nutrition and tests to be done during the 40 weeks. You will also be able to find out about the changes in the mother's body, how the baby bump grows and how the fetus develops.