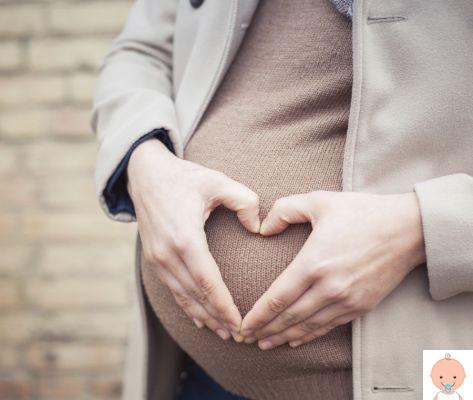 In the thirty-fifth week you are ineighth month of pregnancy. If you are first pregnant, the fetus is likely to descend into the pelvic cavity as early as the 35th week, flipping his head into the cavity.

The baby begins the descent towards the pelvis and positions himself correctly in the channels of childbirth. It is 46cm long and weighs approximately 2,140 pounds.

The fetus always tries to move a lot, but the space for him is very little and it is not uncommon for you to feel his kicks up high, even up to the chest.


Communicate a lot with your baby, with words, caresses, music. Choose the right foods because what you eat characterizes the taste of the amniotic fluid.
Il  amniotic fluid renews every three hours. The baby's intestines are filled with meconium, a greenish liquid produced by the secretion of the food glands combined with bile pigments, fluff and cells from the intestinal wall.

You may start to feel small contractions, your stomach tightens, and the contractions last about 30 seconds. If they are regular they could be a sign that labor has begun. This week there is an increase in Braxton Hicks contractions, pre-birth contractions that usually start from the 20th week of pregnancy.
There is no reason not to have sexual intercourse with your partner even though according to some studies there are substances in the sperm that can promote the initiation of contractions. Maybe you could put into practice some sexual practices that are more suitable for the situation.

Belly lasts in the 35th week. Because?

Having the feeling of a hard belly is common in the last months of pregnancy and can lead to the prodrome of labor. If you feel this feeling at the end of the day, don't worry: lying down for an hour might be enough to feel better. If, on the other hand, the situation lasts longer and is accompanied by dark-colored blood loss a visit to the gynecologist is preferable. The belly hard in other cases could also be caused by constipation which often affects pregnant women especially in the last few weeks

During this week, check that you have everything you need for the baby's layette: 8 bodysuits, 8 pajamas, 2 or 3 sweaters, 3 pairs of socks, hat, gloves, blankets and sheets for the crib.

Give birth in the XNUMXth week of pregnancy

What are the risks if a woman gives birth at 35 weeks of pregnancy? There really shouldn't be. The prematurity limit is set at 37 weeks of gestation. However, a small percentage of babies are usually born after 32 weeks. A newborn at 35 weeks could be born without any problems, furthermore, the dating of the pregnancy could be false with respect to the date of actual conception.

A baby who is born between 35 and 37 weeks of pregnancy is termed a late premature and not serious. Weight is an important fact to consider for a premature baby, therefore a 35-week-old baby weighing more than 1,5 kg should not present major problems. However, he will be monitored in the NICU.

If you want to know more about the others 40 weeks of pregnancy,  has created a nine-month calendar with advice on health, nutrition and tests to be done during the 40 weeks. You will also be able to find out about the changes in the mother's body, how the baby bump grows and how the fetus develops.