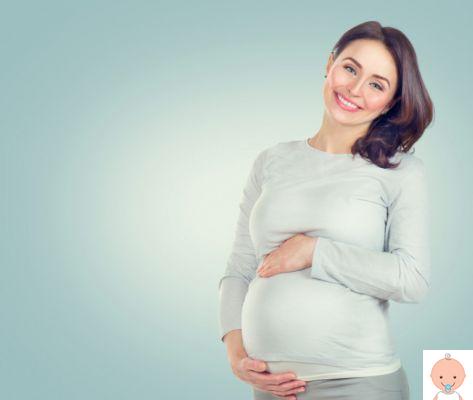 From the 36 week of pregnancy it would be advisable to have a visit once a week. If possible during this period go and see the delivery room and maternity ward to the hospital where you will have to give birth. You are now in the ninth month of pregnancy and the birth of the baby is near.

By now your baby has reached the weight he will have at birth, and it is only a matter of time for you to meet for the first time. This week you may be undergoing your last one medical examination to evaluate the quantity and quality of amniotic fluid.
From the 36th week the neonate takes the actual shape of a full-term baby and measures approximately 46cm from head to toe and weighs about 2,380 grams. It is no longer covered with fluff, the hair that has covered her body to date, will now grow in length until birth.

If the baby were to be born today it would not be considered premature. From now on, his body is protected from many viruses thanks to your antibodies.

The child is almost fully mature, in most cases he is placed in a cephalic position and may at any moment descend into the pelvis and be ready to be born.

Read also: Baby in the ninth month of pregnancy

Symptoms of the 36 week of pregnancy

Ultrasound at the thirty-sixth week of pregnancy (PHOTO)

How the body changes in the 36th week of pregnancy

The uterus is preparing for birth and therefore it is normal to feel contractions, these are symptoms that generally do not last more than 30 seconds, but beware: if they become frequent and regular it is better to go to the hospital because labor could have started.
There is hardly any place in the womb where the baby can move freely. He has settled into a single position and the main movements that the mother feels are those of the arms and legs.

Right now you should only be taking 250 grams per week. On average the average increase this week should be around 10,8 kg. The minimum is 8,6 kg, while the maximum is 13 kg.

La breaking of the waters usually triggers labor, but can sometimes be confused with urine leakage or simple vaginal discharge. Stay alert. After the water breaks, the contractions begin, if they return every 5-10 minutes the labor has begun.

What to do at the XNUMXth week of pregnancy

All projects 36th and 37th week of pregnancy it is advisable to carry out the swab for streptococcus, an examination recommended by the Guidelines of the Ministry of Health. Through a vagino-rectal swab, the presence or absence of beta-haemolytic streptococcus is identified, a bacterium that could attack the baby at the time of delivery, triggering an infection.

If you want to learn more about the other 40 weeks of pregnancy, she has created a nine-month calendar with advice on health, nutrition and tests to take during 40 settimane. You will also be able to find out about the changes in the mother's body, how the baby bump grows and how the fetus develops.