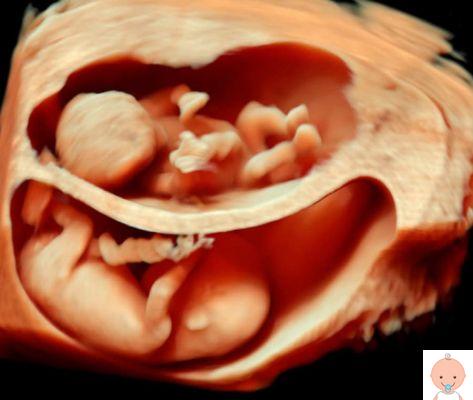 L'echography remains one of the most awaited moments by future parents.


The indispensable ultrasounds during pregnancy

Thanks to'echography not only is it possible to establish the course of pregnancy, the growth of the fetus and find any disorders or anomalies, but also to see the fetus in its smallest details, and sometimes if you are lucky, it can happen immortalise the child in curious attitudes, while sucking his thumb or while smiling.

A few days ago Bernard Benoit, gynecologist at Princess Grace hospital in Monaco, took a snapshot of a real twin pregnancy exceptional (WATCH).
I gemelli in the 12th week they are perfectly visible in incredible detail.


Malformations invisible with ultrasound, too many cases


A technique, that ofultrasound three-dimensional, which allows parents to have a real photographic portfolio from before birth (and many use the photos of the ultrasound scans in the baby's albums), but above all to photograph the situation in detail.

this type of ultrasound?

The exam takes place in the same way that traditional two-dimensional ultrasound (which offers a black and white image) is done, but the scanner detects a series of images of the baby from various angles and then reprocesses the whole, returning a ' three-dimensional image, extremely realistic.

in 3D it still offers a static image of the fetus, while the 4D one returns a moving image, as if you had shot a short video of the baby inside the belly.

add a comment of 3D ultrasound: the best photos