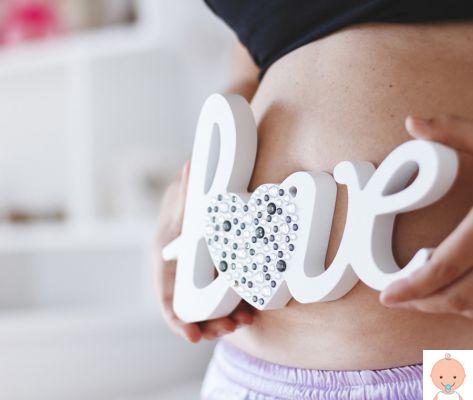 In the fifth week of pregnancy the child it continues its development and slowly its body takes shape. You begin to feel some slight changes in your body and the pregnancy test undoubtedly reveals that you will have a baby in nine months.

You may feel particularly fatigued and tired, and suffer from the classic nausea of the first months. To reduce vomiting eat fresh food, drink plenty of water.
You should drink at least one and a half liters ofwater a day to rehydrate the body, reduce nausea and protect the kidneys which work twice as much during pregnancy.
- hormones can cause mood swings and you can go from laughing to crying in an instant. And small first trimester ailments don't help, like bloating after meals or heartburn.

How the body changes in the fifth week of pregnancy

The levels of estrogen and progesterone rise and this inevitably has repercussions on the psychological and physical state, such as, for example, an increase in white vaginal discharge (leucorrhea), or shinier and more gorgeous hair and skin.
The plant of theembryo and the first changes that occur in the uterus can cause some abdominal cramps or minor discomfort. The breasts are very florid, painful and tense.

Fifth week of pregnancy, as the baby grows

They begin to develop arms and legs and the queue it had last week begins to disappear to make room for the legs.
His heart beats and nearly doubled. The beat it is very fast, twice that of an adult.
The nervous system is developing and the main organs, such as the stomach, lungs, liver, kidneys, are almost completely formed.
The eyes are a small protrusion, the nose and mouth widen, and the ears are still tiny slits. At the end of the fifth week the embryo measures up to 2,5 mm, like a seed.
The baby at this point looks like a tadpole, with a huge head and a body that has yet to be defined.

Following the right diet is very important during pregnancy, but we don't always manage to really control the degree of safety of the foods we bring to the table.
Pesticides, hormones, metals and other substances are potential dangers that we find in many foods.
Avoid consuming large quantities of large fish such as tuna, swordfish, marlin because they contain a greater amount of mercury. Choose products from organic cultivation and production.

for nausea it can be useful eating small and frequent meals, eat a salty cracker before getting out of bed, use motion sickness bracelets, acupuncture, use ginger in cooking or take it as a tablet.

Ultrasound during pregnancy, what can be seen

If you have taken the pregnancy test and you already know you are pregnant, you can contact your gynecologist for a first check-up.

From the fifth week to the birth: this is how the baby bump grows - Video

A future mother has decided to tell about her pregnancy through a very nice video on Youtube. The clip, specifically, shows how her baby bump grows from the fifth week of pregnancy to the birth of little Oliver. The video has surpassed one million views on Youtube.