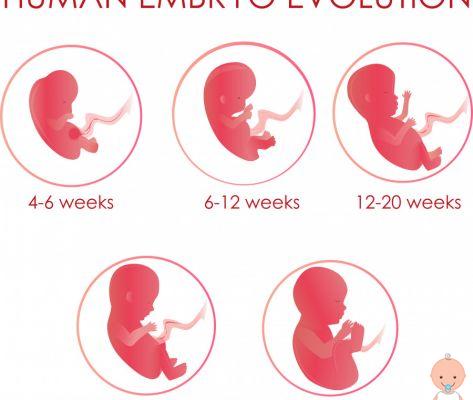 All projects sixth week of pregnancy you have arrived in the middle of the first trimester and are now aware that you are expecting a baby. The child continues to grow.
In just one week he has doubled its size and is always folded back on itself.

Sixth week of pregnancy, the symptoms

Don't worry, they are completely normal disorders at this stage. Ask your partner for maximum understanding e rest as much as possible.
But one of the main and most common symptoms of pregnancy is morning sickness. Between 50 and 70 percent of pregnant women suffer from nausea in the first trimester of pregnancy. The good news is that it will pass.
La nausea of pregnancy is strictly caused by the progressive increase of Beta Hcg hormones, which begin to stabilize around the third month. This phenomenon slows the classic morning sickness.

Remedies for nausea in pregnancy

A few tips on how to fight the nausea of ​​pregnancy

Sixth week of pregnancy without nausea

Do not worry if you are in the sixth week and have no symptoms and above all you do not have the classic morning sickness. Don't worry, your baby is fine anyway. Not all women suffer from it.

How the body changes during the sixth week of pregnancy

During this period, new small ailments may arise and your body begins to take on new roundness and visibly change: the stomach becomes rounder, the breasts increase in volume.

Call your gynecologist and make an appointment for the first ultrasound which will take place between the 12th and XNUMXth week of pregnancy. Sometimes even in the sixth week it is possible to do an ultrasound, but there is a risk of not yet hearing the baby's heartbeat if ovulation and fertilization took place later.

Your doctor will likely prescribe some for you exams blood and urine.
They are used to determine your blood type and detect the presence of viruses, such as:

Sixth week of pregnancy, as the baby grows

Her forehead it is much larger than the rest of the body, and is folded forward, the face is swollen and the nose flattened. Its shape resembles that of a pea.
Her mouth it begins to develop and the small seeds of the milk teeth and the tongue appear.
- eyes they are large and very close to each other and are covered with a membrane that will become the eyelid.
Le Dita of the hands and feet are webbed and even if you do not notice it the baby moves in the womb and for now he still has a lot of space available.
His heart starts beating and has a frequency of 150 beats per minute.

Read also: The first ultrasound, everything you need to know

Sixth week of pregnancy, the curiosities

Eat regularly and healthily and avoid violent sports, the embryo is still attached to the uterine wall and by the sixth week the risk of abortion spontaneous is still high.

Advice from the midwife for the sixth week of pregnancy

Because you haven't had blood tests yet and you still can't know if you are at risk of contracting toxoplasmosis, try to avoid eating raw or undercooked meat or fish, uncooked cold cuts (eg yes cooked or roasted ham, and no raw ham or salami), wash fruit and vegetables well before eating them; if you have a cat ask someone to clean the litter box or do it using gloves and washing your hands thoroughly after doing so. Try to lead a normal life and exercise regularly, such as walking or swimming.