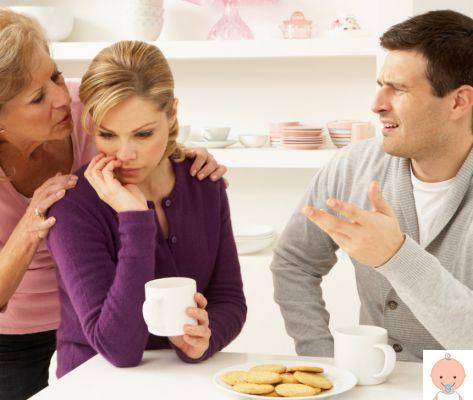 Maybe he has his own vegetable garden where he grows very healthy and perfect vegetables. Her delicacies are unparalleled, it is useless to compete. And our ethnic or avant-garde recipes make her horrified. She is a true champion of tradition.

The misunderstood is a real one victim. She has been a victim all her life, of her husband, of the children, now of the daughters-in-law who prevent her from seeing her grandchildren as much as she would like. A complaint she continues, with an unbearable tone of voice, she would want to shake her from this blanket of self-pity

She feels like the best mom in the world. A educational model and perfect mother, whose methods are proven. It is useless to discuss his pedagogical theories.

Theatrical, prima donna, she never misses opportunities to have her say and attack. With this type of woman we can only do two things: suffer or counterattack

She is perhaps the most common and most annoying type of mother-in-law. The one who intrudes on everything even if she is not asked for her opinion. She always has something to say. She calls at any time of day and shows up at home without warning. You ask inappropriate questions and remarks. And if you point it out, she makes you feel guilty for life.

Read also: Behaviors of the mother-in-law to avoid

He's bad for anything. Every day he will call to complain about a new disease and demand everyone's attention. In the house there are all kinds of drugs, which of course she prescribed herself.

The one who feels alone

It is capable of giving you tremendous guilt and ruining your day. She begins the call by listing all the reasons why she feels lonely, sad and depressed. And she ends up stating that only a visit from her grandson could bring her good mood back.

The one who always gets gifts wrong

She may not be the most common type of mother-in-law, but she too can be quite annoying. Not only will she spoil the children with her constant gifts, which she makes in a desperate attempt to win them over, but she often buys toys and items unsuitable for her grandson's age. After all, if we think about it, there is a bit of all these types of mother-in-law in our mother-in-law. A truly unique mix

Intrusive mother-in-law, what to do?

How to learn how to deal with a pushy mother-in-law? First of all, it is useless to delude oneself: she will not change and will be present at every possible opportunity. We do not think we are going to war on it and we try to "parry the blow" with kindness but also firmness.

In short, let's trust her and show her affection and respect, but always keeping a certain distance.

What to give to the mother-in-law

Finally, here are some tips for choosing the right gift for the mother-in-law.

In reality, we can also break into her heart by involving the children in the creation of a gift made by them or by giving her a frame with a photo of her with the children.