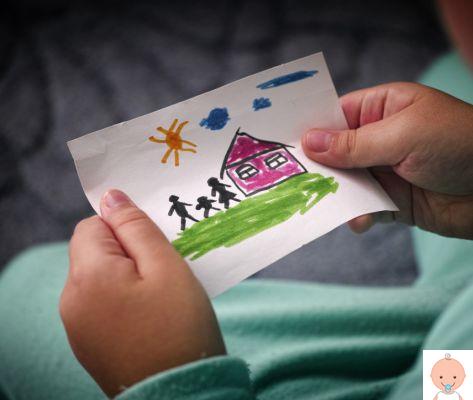 Adoption is a practice that has its roots in the mists of time, yet it remains an adventure, albeit a wonderful one, also full of difficulties. There are many facets of it, and each situation is obviously different, but some of the doubts and problems that i adoptive parents they face are common, and it's comforting to get there at least in part "prepared".I books we want to talk about today are largely written by authors who in turn are adoptive parents, and have chosen to tell their experience in the awareness that it can be useful to those who have yet to embark on this journey. Will find useful advice manuals on all aspects of adoption, but also novels that they tell true stories and instructive. If you too are expecting a foster child, here are some books that could clear up your doubts, soothe your anxieties and inspire you.


Let's start with the diary of an international adoption, written by a very special father: Leo Ortolani, the famous cartoonist creator of the Rat-Man series. The book is one collection of letters that Ortolani wrote to family and friends during his stay in Colombia where, together with his wife, he adopted their two girls. In his letters we talk about all the events, from the first meeting to the difficulties, to the joys. Later Ortolani decided to keep the e-mails so that one day his girls could find out how it had gone, but later his editor decided to make them accessible to the public as well. The 24 chapters are accompanied by beautiful cartoons by Ortolani.

Read also: Story of an adoption in Nairobi

To mothers not yet mothers. To dads not dad yet. And to the children who are waiting for them to finally become children.


Adoption told by an adoptive father: the book was born from his online diary, designed to connect adoptive parents by confronting and supporting each other in all the difficulties of this splendid adventure.

Only a child can give birth to a father. As a father, I was born a little at a time writing this diary to tell my daughter how we found ourselves among eight billion people, but linked by a thread that we rewound up to her. In a meeting with other adoptive couples, I realized that we all lacked something to take us by the hand and help us smile in the face of the difficulties of this adventure called adoption.

A book to give and to treat yourself, and which tells the adventure ofadoption experienced by grandparents, who have always been very important figures of reference for their grandchildren. But what it means to be an adoptive grandfather? The book reveals it by telling the point of view of a child who tells her future grandparents, answering the most important questions: how do you support the new parents, how to welcome the baby, how to talk about adoption and so on. It can be bought on Mondadori Store.

Un poetic novel for children which narrates the adoption from the point of view of one older sister, anxiously awaiting the adoptive brother who, together with his parents, will go to pick up in Burkina Faso. Unlike her classmates, little Sara does not have a mother with a big belly, on the other hand she has a photo of her future little brother, to show proudly to her classmates waiting for the family to expand.


Il romance tells the story of the author and her adopted child: the book was initially conceived as a gift for son's birthday. It seems that the idea was born from a friend who asked her to tell about her experience of fostering and adoption "in a few lines": the result is a novel that starts from the anxiety of waiting up to tell "a small story of daily heroisms ".

It was when you cried for the first time, I don't remember if at three or four months, many to cry the first time anyway, that I felt your desire to make it. I, who have been happy a thousand times in my life, have understood that in those moments the reason for my happiness lay entirely in your tears.

A book resulting from the meeting between the writer Cristina Bellemo and an association of adoptive families from the upper Vicenza area: Fammifamiglia is a collection of true stories, texts, poems, nursery rhymes that tell the various facets of adoption, a story of "taking care, take care ".

Fammifamiglia is a magic word that has music inside. The music of being together, of feeling included, belonging, welcomed and welcoming the differences.

Recite the presentation of the book. A text aimed at adoptive parents but not only.

To play down the little-big difficulties of adoption and the long process that precedes it, here is a fun but exciting diary on the adventures of an adoptive family.

You know when your ship goes left but you turned right? You turn left hoping to finally go right, but the ship continues to go left. In a panic, you start waving the yoke frantically here and there, here and there, but the spacecraft jumps, up and down, up and down. Well, do you know when the spacecraft no longer responds to commands? When does it seem to have a life of its own (but a life that goes against yours)? No?! Has this ever happened to you ?! It is because perhaps you have never ventured into a second adoption in Colombia, to take a small child, hungry and overweight, already having a firstborn (Colombian too) of not even 4 years old, jealous, leader and affectionate on the verge of harassment. Or maybe because, unlike us, you are a very good driver. Our spacecraft is called family and in this diary we tell how we are trying to get it into orbit. It will be fun to read a few passages, and at the same time it will be quite dramatic. But it is our story, without fictions, without lies, all true, even if at times it does us no honor

In this case it is a book about how to explain adoption to children, using the right words (and the wrong ones) to tell it. The book is double-sided: on the one hand colored and illustrated for children, while on the other we have texts for adults, full of good advice on how to approach the subject with sensitivity, but also with honesty.

We conclude with a book that tells the complicated bureaucratic procedures of a couple who decide to adopt a child because they are unable to have natural children. The novel, in part autobiographic, raises the fiery issue of the right of minors to have a family, and how this right seems to some people almost opposed by the institutions themselves. But above all it tells the tenacity and courage of the two parents, and how to orient oneself between the various bureaucratic aspects of the story.

add a comment of 9 beautiful books for future adoptive parents