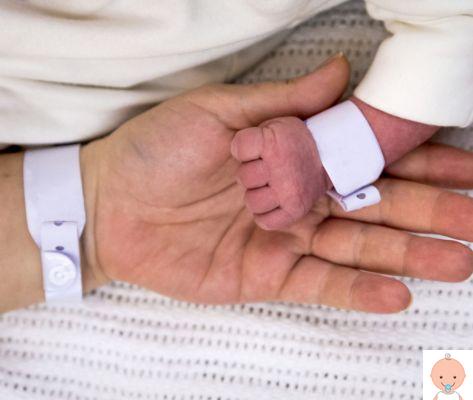 E. called me now at 5 months of pregnancy, a difficult, complex pregnancy in which they put her to rest almost immediately. She is expecting a little girl L. who makes her despair a little, between continuous slowdowns in growth and movements that trigger contractions. She and ... she called me because she was feeling very depressed, she didn't know what was happening to her or rather, she didn't understand her body what she was doing. She felt at the mercy of unknown emotions and fears even though she was splendidly cared for in a hospital in Brianza.


My work with her in pregnancy has been to give oneself further and further away deadlines, one step at a time, listening to self-understanding day after day until little L. decided it was time to be born. The weeks go by and we arrive at the 36th week, there is now only a month to go, and I have the pleasure of meeting the father of this little girl who very calmly exposes me his doubts, his fears of not being able to help his wife and her desire to attend the birth anyway despite being afraid of not feeling well.

Read also: The story of birth with an epidural by R.

We are now in the 37th week and a few days. At 17.00 E. she begins to feel bad, nausea, severe pains in the stomach, she calls me and says "maybe we are". I walk the approximately 20km that separate me from E. with serenity knowing that we had all the time necessary to live that moment. Entering the house I find E. who tries to smile, a little pale but still serene. The most agitated of all was the father already ready with the bags in hand to go to the hospital. The visit carried out around 22 pm reveals that we are about 4 centimeters away, and from auscultation of the heartbeat I discover that L. is fine. Every 15 minutes I listen to L.'s heartbeat because she is small, thin and above all preterm, everything is fine.


The contractions from labor begin to be felt and E. who had considered the option of having an epidural asks me to go to the hospital. We get in the car for those few minutes that separate us from the hospital, the contractions become more intense and E. no longer smiles, she feels bad, she is nauseous. Arriving at the hospital they visit her, 5 centimeters, one centimeter in just under 30 min. We understand, L. has decided to be born and also in a hurry. There is little time left and the pains are getting stronger, E. tries to hold back her screams until the midwife colleague tells her that she can let go, that she can do what her body tells her to do. And then she breaks free and starts using her voice, with vocalizations, screams and sweet words for L.

It is midnight and we are fully dilated, the expulsive period begins. L.'s father who was so afraid of not being enough as he hears screaming E. begins to feel uncomfortable, as he sees her push and feel that she feels pain he feels really bad and decides to leave the delivery room, he will welcome the newborn baby but now he just doesn't feel like it. By the time she gets out of the room, 10 minutes pass and her little L crawls out of her mom's belly. She is a little wad with a lot of hair. I'm going to call her dad, she was afraid of the sight of blood from what he told me before giving birth, it is true that she has lost very little of it but I try to prepare it. As we open the door to the delivery room and see little L. for the first time she doesn't even notice what is seen and what is not seen she rushes to E. who has the baby on her stomach. She is in ecstasy indeed, they are ecstatic, all three are in love.


L. is small and born slightly preterm is still struggling to latch on to the breast and for her the birth was very tiring. I leave them around three in the morning, all three asleep, L. on E.'s stomach and the father sitting next to the bed holding the hand of both of them. So I leave them going away on tiptoe, so as not to disturb, we would then calmly see each other at home. I leave them with the awareness that the birth they desired, and which they feared would take place too soon, went instead in the best way and with infinite serenity I close the bedroom door and go home.

Video story of the birth at 37 weeks

A whole new App to not forget the contraceptive pill ❯