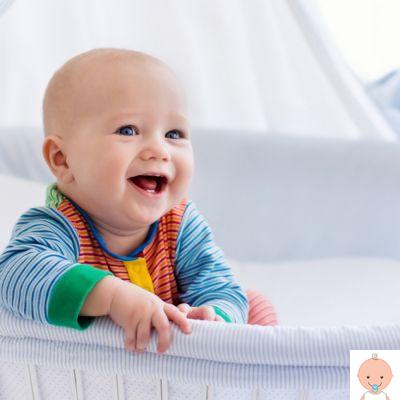 If you are expecting a boy and, in the list of your favorite male names, proposals with an international flavor stand out, then carefully read this guide dedicated to Adam, name for child, with lots of curiosities and information.

Etymology of the name Adam

Adam is a variant of the name el village Adam, di anticof biblical origin. In the Old Testament, Adam was the first man created by God, from whose rib Eve, the first woman, was created. Etymologically Adam derives from the Hebrew Adam which means "uomo", but it can also refer to humanity as a whole. According to some theories, the Hebrew term derives in turn from the Akkadian adamu (which meant" create "and therefore in a broader sense could be rendered as" creature ").

Meaning of the name Adam

The most accredited meaning of the name Adam is "man", but it can also mean" humanity "or" he who is created, creature ".

Il biblical meaning, it can be "made of earth, born of the earth": God, in fact, created it from the dust and animated it with his breath.

Spread of the name Adam

Widespread, especially in the Middle Ages, throughout Europe, thanks to the cult of the monotheistic religion, Adam has always been very popular in both Christian and Muslim circles.

In the country the original Adam form is very rare: in 2022 only 7 children were called this way. While it is certainly more fashionable and has experienced a real exploit in recent years. According to the ISTAT data related to the most popular names in the country, in 1999 they were called Adam 43 newborns, while in 2022 the absolute value reached 659.

When is Adam's name day?

There are several blessed who bear this name and two saints. In most cases the name day is celebrated on 16 May, in memory of St. Adam, abbot of San Savino in Fermo.

Adam is a person charismatic e ambitious. A born leader, endowed with natural authority and significant persuasive force. He is also distinguished by his unerring courage and fighting spirit. He does not avoid any obstacles to carry out his plans for him.

Adam is pretty Reserved, introverted, often hard on himself. He is a worker and tenacious and stubborn, who never stops what he has started and wants to complete all his projects. He is practical, calm, reassuring for those close to him: he is a charmer and a loyal and passionate lover. He has a very good business sense and is particularly thrifty. He is understanding and tolerant towards others, he is generous, he dedicates himself to loved ones and often acts as an intermediary in case of conflicts.

Adam loves living in harmony with those around him, but he doesn't give up on his own ambition, to their independence. Equipped with a deep sense of responsibility, Adam is capable of achieving all of his goals.

What profession will Adam make? The professions in the fields of accounting, economics, but also those of leadership and management are perfect.

What zodiac sign is associated with the name Adam

The zodiac sign that comes closest to Adam's personality is that of Libra. He loves luxury, has an innate elegance, is committed to finding a balance in conflict management.

What is Adam's precious stone

Il ruby it is Adam's lucky gem: it evokes blood and fire and is the stone of courage, power, but also of victory and love.

What color is associated with Adam

Symbol of the principle of life, the red is the color that characterizes Adam. This color refers to strength and power and also evokes courage, determination and activity.

What is Adam's lucky number

Adam's lucky number is the1: the number of the leader, ambition and independence.

What a song to dedicate to Adam

We offer you a song called "Adam's song" by the American pop punk band Blink-182.