Aerosol during pregnancy: can it be done? And what are the risks? 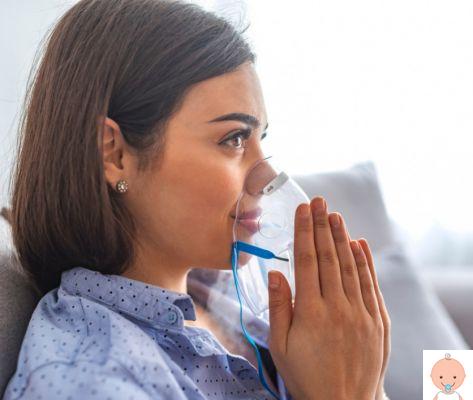 L'spray therapy it is widespread in the country, less so in other countries. We certainly use it to control cough, asthma and bronchial symptoms, but also simply to dissolve mucus and phlegm when we are cold. We use it very often on children, but what researches tell us about the use ofaerosol in pregnancy? Is it safe and what are the benefits?

Is it possible to do aerosol during pregnancy?

Laerosol therapy is not contraindicated in pregnancy, but of course it will be the specialist who will assess the situation and prescribe the right drugs that can be used without particular risks: for example some mucolytics - which serve to dissolve the phlegm in case of a fat cough or affection of the upper respiratory tract - are to be avoided in the first trimester of pregnancy and during breastfeeding, while cortisone should be used in their lowest effective dose.

Benefits of aerosol in pregnancy

I benefits of aerosol They are different:

Asthma is one of the most common medical problems that occurs during pregnancy and can be potentially serious. Some studies have suggested that asthma complicates up to 7% of all pregnancies and about 30% of asthmatic women report that the problem got worse during pregnancy.

Lasthma causes complications during pregnancy? Pregnant women with asthma may have a slightly higher risk of giving birth prematurely or having a baby with a low birth weight. Research also suggests that women with severe asthma are more likely to experience preeclampsia.

The specialist may, therefore, deem it appropriate to prescribe one spray therapy which includes both bronchodilators and drugs deemed "safe" in pregnancy.

They are usually prescribed broncodilatatori short-acting inhaled or anti-leukotriene agents such as montelukast and some corticosteroids inhaled, such as budesonide.

Rhinitis can begin at any time during pregnancy and disappears after delivery when hormone levels return to normal. THE main symptoms of rhinitis gravidarum I'm:

L'aerosol, performed with the nose fork or with the classic Rinowash, can be useful for clearing the stuffy and congested nose and promoting the thinning of the mucus. In this case it may be sufficient to nebulize a simple physiological solution mimicking the classic fumigation.

How to do aerosol during pregnancy

It is very important to know the way in which aerosol therapy should be done, especially if you suffer from asthma. Some studies have observed that the majority of pregnant asthmatic women adopt an improper inhalation technique and this can lead to lack of asthma control, with even risky outcomes.

It is common to seek medical advice before using an inhaler or starting any aerosol therapy.

Substances and drugs most commonly used in aerosol therapy I'm:

Of course, like any other drug, its use in pregnancy must be carefully evaluated together with the doctor and in any case after carefully reading the package leaflet. It is generally recommended not to use drugs in the first trimester of pregnancy and drugs such as antihistamines, vasoconstrictors, cortisone. However, inhaled cortisones, bronchodilators and leukotriene inhibitors - drugs widely used in short and long-term asthma therapies - have few side effects and there is no reason to stop them, unless otherwise indicated by the doctor who will make an evaluation. beware of the risks / benefits.

Audio Video Aerosol during pregnancy: can it be done? And what are the risks?
2030 children's agenda: how to explain it to our children ❯

add a comment of Aerosol during pregnancy: can it be done? And what are the risks?