Alcohol in pregnancy causes damage to the fetus's brain 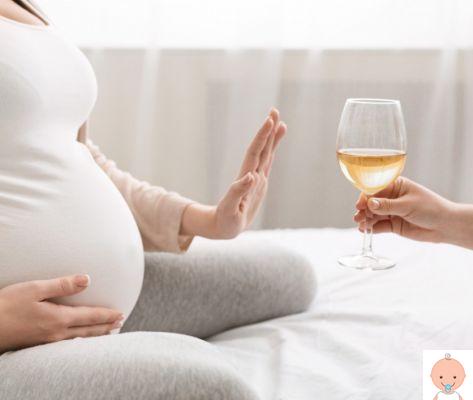 Alcohol in pregnancy: harm to the fetus

Many expectant mothers are wondering what to eat and what lifestyle to have during pregnancy. Sometimes they drink a glass of wine or sparkling wine to celebrate, but a study has shown a connection between alcohol in pregnancy, harm to the brain of the fetus and other serious consequences on the unborn child.

A study by the University of Vienna has shown that as early as the twentieth week of pregnancy, structural differences can be identified in children's brain whose mom consumes alcohol compared to those whose mom, on the other hand, doesn't drink any.

The research is based on a survey of 500 pregnant women between the 20th and 37th week of gestation: each of them was subjected to an anonymous questionnaire asking who consumed alcohol during pregnancy. 51 pregnant women responded positively, who were then subjected to fetal magnetic resonance imaging. The results of the examination were subsequently compared with those of the control group of the same number of women at the same gestational age who instead declared that they had not consumed alcohol.

Read also: The use of drugs in pregnancy

The results were astounding, even though the risks of alcohol in pregnancy have been highlighted time and again. But this is the first ever in which it clearly demonstrates how drinking alcohol during the months of gestation can have very serious consequences on children.

The children of mothers who reported drinking alcohol during the trial have significant structural differences already in the womb. These differences affect several areas of the brain, which would develop - precisely because of alcohol - in an anomalous way. This finding would also explain the symptoms of fetal alcohol syndrome, i.e. behavioral and learning disorders and language delays.

What is fetal alcohol syndrome

Fetal Alcohol Syndrome (FAS) is a very serious permanent disability to which the fetus is exposed when mother consumes alcohol when pregnant. There is no tolerated dose, because it depends on several factors: for this reason the Ministry of Health also recommends total abstinence from alcohol consumption to avoid serious harm to the unborn child.

According to the Istituto Superiore della Sanità, alcohol consumption during pregnancy is to be avoided from the very first days, so when you suspect you are pregnant or have a positive test in your hands. This is because the body's reaction toalcohol intake, even in small quantities (the glass of sparkling wine to celebrate, for example), differs from woman to woman and can depend on the possible intake of drugs, health conditions, the ability to dispose of alcohol and more.

Now it has been scientifically proven that consume alcohol while pregnant it causes serious impairments especially in the brain and intellect, it is even more important to follow the recommendations of the medicine and avoid drinking altogether during the 9 months. Abstinence it is the only way to prevent it, and we must remember that the body - during gestation or not - does not need alcohol to stay healthy.

Leaving a child afterwards: it happened to Anna Falchi ❯