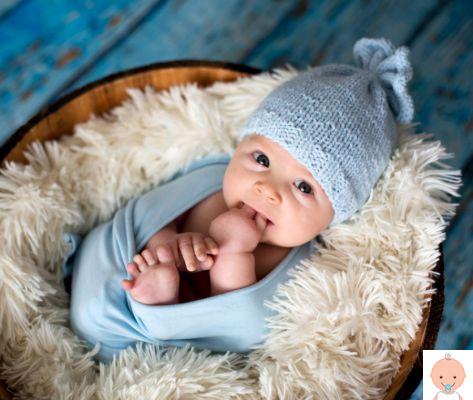 Aldo is a male name of Germian origin which in the past was used above all as a diminutive of longer and more high-sounding names, such as Aldobrando ad esmepio, and which today, however, has a life of its own. Today we discover in this guide the origin, the meaning, the curiosities about Aldo name for child.

The name day is celebrated on 10st January when the Church commemorates Saint Aldo, a Colombanian monk and hermit in Carbonara al Ticino.

Origins and etymology of the name Aldo

Aldo is an origin name Germanic and was born as a hypocoristic - that is, deriving from a diminutive or a term of endearment - of names starting with the root ald- (which indicates the word "old") or with athal (which means "of noble origins").

According to some interpretations, the name Aldo could, on the other hand, originate from the Germanic term aldio, a term that the Germans used to indicate a person who was, on the social scale, between the condition of servant and that of freedman and which means "semi-free ".

Meaning of the name Aldo

The most common meaning attributed to the name Aldo is that of "expert, wise ", a broad translation of the literal meaning of the term ald- (old), but also of "noble man ".

Diffusion of the name Aldo

Aldo is not a particularly widespread name in the country: according to ISTAT data relating to the most common names, in 1999 Ludovico 206 children were called and in 2022 there were 112.

Personality of a child named Aldo

Aldo is a man mysterious and reserved. He is introverted and shy, little inclined to communication but most of the time he hides behind this facade his marked sensitivity and emotionality. He often feels himself misunderstood and many times he feels discomfort to feel in the wrong place: for this reason he is constantly looking for peace and tranquility, a condition that makes his life easier, allows him to reflect, meditate and devote himself to introspection.

Aldo has an intellectual approach to life, a critical mind tending to skepticism, nervous, loves solitude and for him there are no half measures.

As a child he is wise, poised, introverted: a thousand times he will prefer to get lost in a good book or on a computer than to face the real world, which worries him. Attention, therefore, to help him socialize and encourage opportunities for exchange and sharing.
He shows little of his feelings and emotions, feels uncomfortable in the face of exaggerated displays of affection, yet he is kind, often tries to help others and has very high ideals. He prefers, however, to be alone rather than in a company that does not make him feel comfortable with him.

What profession will Aldo make? He is an unusual man and will prefer original and avant-garde professions, for example those related to new technologies, but also related to entertainment and culture.

Aldo's zodiac sign is Aquarius: full of ideals, with a profound sense of justice, the one born under this sign is very selective in friendship, and has a marked intelligence.

Aldo's color is green that emanates tranquility, balance and harmony (just what Aldo is always looking for). This color, moreover, expresses that character trait of Aldo that pushes him to be often in tension and to always want to have control over the events that happen to him.

Aldo's birthstone is lo Emerald, according to the ancients a powerful talisman of love and luck. This stone calms the spirit and promotes creativity.

Aldo's number is8, capable of making a difference when it comes to making decisions or facing a change, at the same time helps to make projects come true.

There are no famous songs dedicated to Aldo, but we found this nice song for children entitled "Grandfather Aldo "

add a comment of Aldo name for child: origins, meaning and curiosities