Amniocentesis, what it is and when it is done 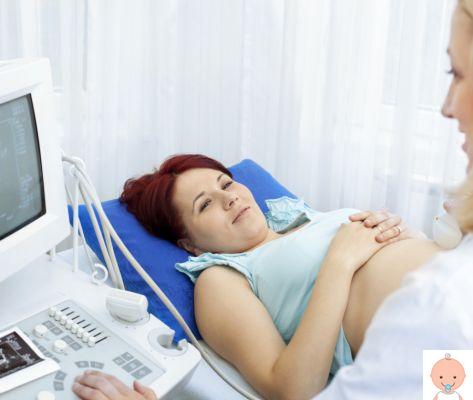 THEamniocentesis is an exam that consists in taking the amniotic fluid of the uterine cavity through a sample. Amniotic fluid is that substance that protects and surrounds the fetus. After collection, the liquid is analyzed to search for the skin cells of the fetus and compose a genetic karyotype. The goal is to identify some chromosomal abnormalities of the unborn child.

Amniocentesis yes or no

It is clear that amniocentesis is an examination aimed at diagnosing any chromosomal abnormalities of the fetus and is performed in time to be able, then, to perform a therapeutic interruption of pregnancy in the event that the result highlights problems. If, out of religious faith or personal conviction, you do not intend to terminate the pregnancy, then it is completely useless to take risks by doing amniocentesis.

Amniocentesis is by no means mandatory. It is a test that is recommended for pregnant women over 35, the age at which the risk of chromosomal abnormalities begins to rise, and in these cases it is offered free of charge by the National Health Service. However, the choice of whether or not to do amniocentesis remains with the expectant mother.

When is amniocentesis done?

This examination is carried out starting from the 16th week of gestation (the ideal period is between the 15th and 19th week when the amnion has reached sufficient size for the practice not to pose a risk to the fetus). These are the diseases that can be highlighted through amniocentesis:

Finally, dosages of substances present in the liquid are made to search for possible infectious agents and a possible presence in high quantities of substances that interfere at the level of the neural tube of the fetus. The withdrawal is done through the use of a August inserted between the navel and the pubis under ultrasound examination. About 20 cc of amniotic fluid are taken and then placed in two sterile test tubes and taken to be analyzed. The ultrasound will show the baby's heart rate and mobility.

Thereafter the woman must stand a rest for two days being aware of the possible occurrence of uterine contractions or vaginal discharge of fluid or blood. After one week from the collection, the pregnant woman can ask for a control ultrasound; this ultrasound is not routine but serves to reassure the woman about the health of her baby.

The average cost of amniocentesis in private settings varies from 500 to 700 euro. In public facilities, for women over the age of 35 who have a doctor-certified risk of having a child with genetic diseases, the exam is free (Ticket).

This examination is not painful but it is useful for the woman to know that despite the simplicity of the sample there is a minimum risk of abortion equal to 1%. For this reason it is the gynecologist who advises whether to carry out this examination making the pregnant woman aware of this risk. It is usually recommended for women over the age of 35 years of age, which they have in family people with problems with chromosomal abnormalities (such as Down syndrome), or when the tri-test or the bi-test detect a high risk of genetic alterations or following a morphological ultrasound that has highlighted problems with the fetus.

The exam is very safe. The errors are exceptional, in about one case out of 1000 tests the cell culture fails (due to lack of growth of the cell culture, massive contamination of maternal blood, etc.) and the sampling must be repeated. Some centers perform the in situ fluorescent hybridization (FISH) with which you can have a preliminary answer (the one on the classical forms of Mongolism) afterwards only 48 hours from the execution of the sampling, while the definitive answer is obtained after approx 12 15-days.

The most frequently observed complications are abortion and rupture of the amniotic sac. The general risk is one abortion in 100 procedures, but in highly qualified centers this risk drops to 1 abortion in 500 amniocentesis. Then there is a whole series of possible problems:

Both are invasive prenatal diagnostic tests, because in both cases a sample is taken with the insertion of a needle into the uterus, under ultrasound control. There villocentesis it is performed earlier than the amniocentesis, around the 10-12th week. In this case, if the examination reveals chromosomal or genetic abnormalities, if the mother does not intend to carry the pregnancy to term she can terminate the pregnancy with curettage, instead of a abortive birth as in the case of amniocentesis.

In recent years, a new test called super-amniocentesis has been developed which would be able to diagnose 80% of the diseases that can affect the fetus, while the current amniocentesis does not exceed 7%. The new exam is called It's called Ngdp, acronym for Next generation prenatal diagnosis.

How does it work? A software analyzes the genome down to the smallest detail e identifies the pathologies selected by analyzing 300 genes which are involved in most of the genetic diseases detectable in the uterus. For now it is offered at a cost of 1500 euros in some specialized centers.

Audio Video Amniocentesis, what it is and when it is done
Amniocentesis or villocentesis? ❯

add a comment of Amniocentesis, what it is and when it is done