Anxiety and depression: can antidepressants be taken during pregnancy? 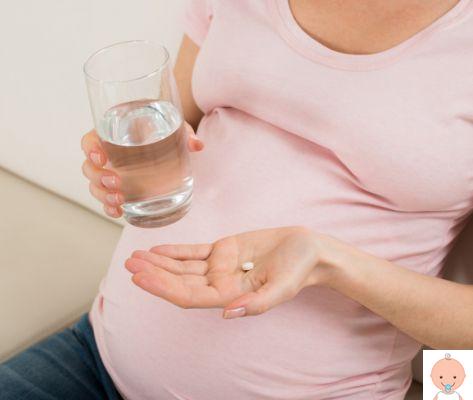 Antidepressants in pregnancy: can they be used?

Depression and anxiety are a condition that affects the entire population and certainly does not exclude pregnant women. This is why it is important to talk about antidepressants in pregnancy and understand what can be done and what not.

The narration of the maternity it is often misleading: we tend to say that a woman, once she becomes aware of the fact that she is expecting a baby, lives in a state of almost blissful joy, so that everything will be beautiful and very easy. The birth then, should make anyone melt, doing fall in love every woman at the instant of her baby. Unfortunately this is not the case and there is nothing wrong with not feeling comfortable in pregnancy nor to not immediately feel the heart bursting with love after meeting the baby.

For women who already suffer from been anxious o depressants, pregnancy can make matters even worse, also due to the stigma surrounding mental illness. Yet the mind must be treated just like the body: it is therefore important not to underestimate one's condition even in the nine months.

Antidepressants in pregnancy: yes or no?

Just why trough e anxiety are considered diseases to be treated such as fever, pains and any other ailment, it is important that the woman who suffers from them does not make her own mind when she stays pregnant.

The best thing is obviously to talk about it with your own psychiatrist, but not only: the follow up of people with depressive or anxious disorders during the pregnancytaction should be a coordinated action between gynecologist, teratologist, geneticist, neonatologist, pediatrician and, indeed, psychiatrist.

The same AIFA, the agency and the country of the drug, argues that treat mood disorders in pregnancy is essential to avoid maternal and fetal complications: untreated depression can lead to poor nutrition, alcohol abuse, suicidal thoughts and is often associated with premature birth, low birth weight and neuro-behavioral disorders.

For this reason, the medical society is increasingly careful to suggest the right one pharmacological therapy for patients with depressive disorders during pregnancy.

Bottom line: yes, it is possible to take antidepressants in the nine months of gestation.

Which antidepressants when pregnant

Coming therefore to the detail of such as antidepressants can be taken during pregnancy, and provided it is always up to the team of doctors in collaboration to suggest the right therapy (always alongside psychological support), it was generally agreed that:

In any case, it is essential to immediately notify your doctor about taking medications for mood disorders, of any extent.

Why continue the treatment during pregnancy

It is useful to remind the future mothers than theirs health it is as important as that of the unborn child: if the woman is not well, the same will happen to the child as a result. For this reason, if you are being treated for depression, anxiety, panic attacks, bipolarism (even the Lithium is tolerated during gestation) do not stop treatment without first consulting all the doctors involved for fear of harming the baby. If you are planning a pregnancy or are afraid of not being able to manage it because you are afraid of having to stop treatments, talk to the doctors who will reassure you about the possibility of continue to take your medicines or, alternatively, replace them with others more compatible with gestation.

There is no reason to be ashamed of one depressive disorder, but rather it is important to take adequate care even during pregnancy by continuing to take the drugs in agreement with the specialists.

La gestation it is a state that can increase some ailments, physical and mental, for this reason it should not be underestimated and we must not believe those who say that once pregnant everything passes: it could be so, but do not take risks.

Which antidepressants to use in the nine months

add a comment of Anxiety and depression: can antidepressants be taken during pregnancy?