Arguing in front of the children 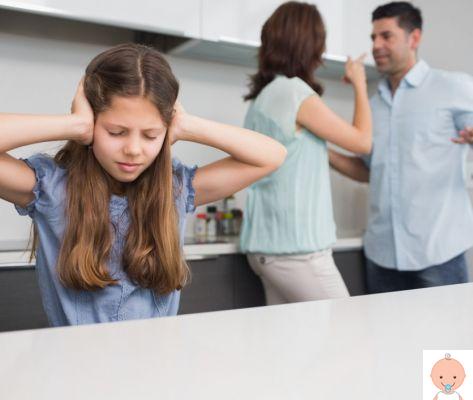 Why not fight in front of the children

It is difficult in certain situations but parents should make an effort not to fight in front of their children. Seeing parents yelling and insulting each other, or worse still hitting each other, really could shock the children, especially the little ones cannot understand the reasons or the gravity of a situation like this. We see why not fight in front of the children and how to behave if it happens.

What does a child feel when parents argue

What to do if it happens to quarrel violently in front of their children? Is critical do not pretend nothing has happened with your child thinking that he has not felt the tension. Even if a child shows apparent indifference in the face of a quarrel between parents, it is not certain that he is not suffering and maybe he is not doing it only for fear of being reprimanded.


It must therefore be explained calmly that it can happen to adults to have some quarrels, but then you immediately make peace; obviously emphasize that it is not his fault and that the love of mum and dad remains unchanged for him.

Phrases such as "mom was angry because dad behaved badly ..." are absolutely forbidden.

Never discredit a parent in the eyes of your child even if the causes of the fight depend on him. These are and must remain only problems of the couple: if you want support and understanding, look for it in friendships or relatives and certainly not in your child.

A childhood spent amidst the screams of parents certainly does not form a serene and secure person: on the contrary, growing up could suffer from serious problems in dealing with romantic relationships.

Arguing in front of children, consequences

Usually, when mom and dad argue, the child thinks he is the cause, because young children report everything to themselves with self-centered thinking and feel guilty about what is happening. Thus a series of fantasy, like fear of being abandoned or that his parents will separate, and feels in that moment that he is no longer the center of his parents' love and thus he fears losing his points of reference.


So it is very important, when the storm has passed, to tell him, especially with the behavior, that he is not at fault. Ignoring what happened would end up fueling his guilt, confusion and fear. Apologize it will make him feel relieved and reassured that his parents care about him and that they understand how much he has suffered.

When the serenity in the couple has returned, you can decide to organize something all together such as going for a trip, a movie on the sofa, a walk. For the child to see everyone together is very reassuring, while if you are still angry then it would be better don't play the happy family skit as the little one would immediately understand that it is a bluff.

Read also: Going into crisis after a child

And here are some tips to make your child peaceful after witnessing a quarrel between parents and not to make mistakes:

Video: Arguing in front of children

When arguing in front of very young children

The important thing is not to underestimate the situation thinking that "he still doesn't understand much". It will also be true, probably the child did not understand the terms of the quarrel, but certainly he perceived the tension, the aggressiveness of the gestures and looks, the confusion and fear.

We must not be fooled if, apparently, the little one has continued to play or has remained good and silent. Some children react so high instead they scream and get angry. In any case, a parent has the task of making his child find his serenity again, reassuring him, making him understand that, even if he has witnessed something bad, everything falls into place.

add a comment of Arguing in front of the children