Babies sleep, how much and how our little ones sleep 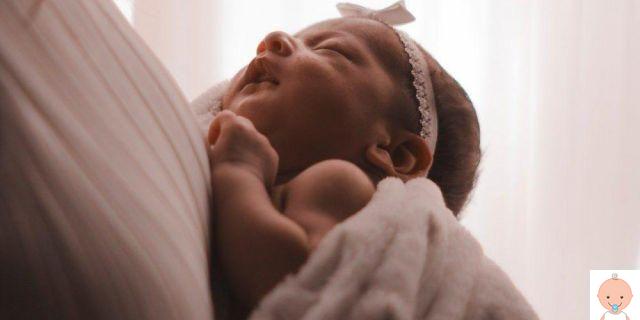 During your pregnancy it will certainly have happened that someone said something like “Take advantage of it and sleep now, because as soon as it is born you forget it. You will see that you are at night ... ". A nice encouragement, no doubt about it, considering the already many anxieties that you inevitably find yourself experiencing. In reality, it is not said that you will no longer sleep: the sleep of newborns can reserve you some pleasant surprises, in spite of those who make you "psychological terrorism". In fact, the little ones sleep much more than you think. With some unavoidable exceptions that we cannot deny ...

Together with the nutrition of the first months, whether it is breast or formula feeding, this is a crucial aspect that new parents are called to face and, not surprisingly, it is one of the issues for which pediatricians are consulted most often. . So let's go to the discovery of the sleep of newborns, to understand how much and how these newborn babies sleep.

The sleep of newborns in the first days of life

Do you have any idea what kind of shock it is for your baby to come into the world? He was sitting nice crouched in your belly, in the warmth, lulled and comforted by your heartbeat. And suddenly: the 40 weeks or so are over and he is "evicted". Whatever type of birth he comes into the world with, the baby is very tired and tends to sleep almost non-stop. And one wonders: didn't we have to stay awake 24 hours a day ?! What's wrong? Nothing at all. But do not sing victory.

After 24-48 hours, in fact, things change: with each cry the baby manifests his need to be attached to the breast, which will happen very often especially at the beginning, at least until the milk reaches the best formulation for him. A requirement that must be respected and that must not make people shout "oh my God, you have mistaken the day for the night!".

Instead, keep one thing in mind. Failure to follow its natural rhythms in the first few days of life can lead to future sleep-related problems. For example, unless there are specific medical reasons, the baby should never be awakened, not even to eat. If your pediatrician doesn't tell you, don't make this mistake.

How much do babies sleep in the first few months

Here is the question that every mommy would like to answer. However, one that is valid for all does not exist. In fact, there are no real rules, even if in general the sleep of newborns is quite similar. In the first month, the baby sleeps on average 16-20 hours a day, between day and night. Usually alternates between 24-3 hours of bedtime and 4-1 hours of wakefulness. Usually, but not always.

After a month, babies' sleep at night may begin to lengthen, but expect some normal waking up to eat. How many? It depends on the child. The “minimum wage” for a baby fed on demand is 1-2, but it could be much more.

At 4 months, some babies sleep at night for up to 6 hours in a row, which rises to 7 around 5 months, for a total of about 15 hours. Subsequently, the hours of sleep per day are reduced.

As mentioned, however, there is no one-size-fits-all model: each child is unique and alone, so don't make too many comparisons with relatives and friends. The timing and modalities of newborn sleep are individual and depend on the child's character, habits, relationships with parents and the general lifestyle of the family. In short, it is a beautiful unknown.

The good rules for sleeping babies

Some rules are important to guarantee your baby (and consequently, you parents) sleep quality. First of all, it is you who must adapt to him and not vice versa: his needs must be met with love and patience. Including the need to be in contact with the mother. In the first few months it is really essential to make him feel safe and to create a special bond. It is a process called bonding.

Change the place to sleep day and night: with the sun, do not shut yourself up in the house as if it were midnight, but let some light and external noise filter through. So if she has to sleep ... she will sleep. But in the meantime, she will gradually understand that there are different places and times.

And from an early age try to have a sleep routine that is always the same. An example? Feeding, bath and sleep or you can reverse the first two. These are tricks that will remain over time as good habits and that will promote sleep even when the children grow up. When they are older, food will play a role in sleep too: in fact, some foods are able to facilitate it.


The stages of sleep in newborns

Gradually you will learn about the sleep of newborns. In moments of transition, for example from agitated to quiet, the little one may move a little, whine or complain. This does not mean picking him up immediately because he could wake up, while in the cradle sleep would not stop (it is a classic mistake of new parents who, thinking they are doing well, make things worse).

If, on the other hand, the crying is strong and continuous, there is something wrong: avoid letting the baby cry for a long time. He will feel abandoned and alone and will not understand why no one favors him. Come closer, caress him and talk to him softly. If that's not enough, pull him up - he may be wet or hungry.

Speaking of baby food: at first the baby will ask for the breast very often, then within 4-8 weeks the intervals between feedings will lengthen and sleep will alternate with moments of quiet wakefulness.

Where to let babies sleep

Here opens an interesting chapter that is also very rich in food for thought because there are many alternatives. There are parents who, especially at the beginning, prefer to let their child sleep in their room. You can put the cradle or cot next to the bed, even choosing the one for co-sleeping that allows you to have it right "at hand" in case of awakening for any reason.

Other couples prefer instead to place the baby directly in their room. There are pros and cons of course. On the one hand, you immediately get used to his independence and to be alone. On the other hand, however, you will be forced to get up at night several times and go to the other room.

Whatever your favorite place, remember that it shouldn't be overheated, even in winter.

How babies should sleep

There is only one correct answer to this question: belly up. It is the basic rule against "cot death", a dramatic but fortunately rare event. There are many scientific studies that confirm this thesis. The supine position can truly save a newborn's life.

Don't overdo it with blankets or even clothing: the baby shouldn't feel too hot. Also, do not put anything in the bed: no to soft toys and pillows. They can get really dangerous.

How to put a newborn to sleep

Here too there is room for the improvisation of mothers and fathers! There are babies who want to be cradled in your arms, others carried around the house with a stroller or even in the car, babies who prefer to fall asleep alone and who do not like contact when they have to sleep, others who want to touch their hair and so on. Street. The way to sleep them therefore depends on their way of being.

On one thing, however, we are quite convinced: some methods should be avoided. One above all: making the baby cry until he is exhausted, until he collapses and falls asleep. There is a real theory based on this principle, complete with publications. But let's try to put ourselves in the newborn's shoes. Let's imagine him desperate to cry, without being picked up and without understanding what is happening. But would you really be able to leave it in the bed without intervening? We don't think so!

add a comment of Babies sleep, how much and how our little ones sleep