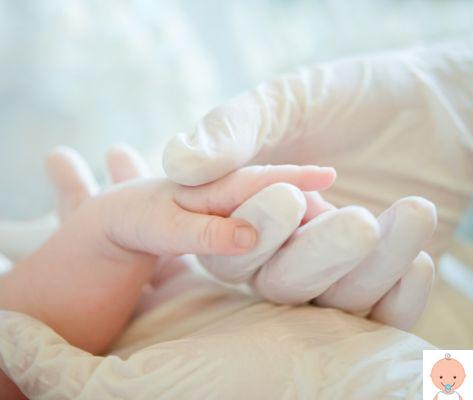 Healing with the cold a newborn who has undergone aasphyxiation at birth and which risks leading to serious deficits and even death? It can, with called therapy baby-cooling. It is a technique born in the United States and since 2009 also available in the country in many neonatal wards of hospitals and villages. Let's try to understand what it is and how this treatment can be useful for children who have had a problem with asphyxiation.

With the term hypoxia it is defined as a partial or total lack of oxygen in one or more tissues of the body including the blood; the term asphyxiation indicates the condition in which the pulmonary or placental gas exchanges are impaired; L'ischemia is the reduction or interruption of blood flow following hypotension or vascular occlusion. In the asphyxiated infant, hypoxia and cerebral ischemia go hand in hand and is generally spoken of hypoxic-ischemic damage.


The Istituto Superiore di Sanità specifies that thehypoxic-ischemic encephalopathy it is a major cause of neonatal death and neurological disability in babies. The estimated incidence is about 1-2 / 1000 full term births and up to 60% in premature babies weighing less than 1500 grams.

Without immediate treatment, asphyxiated babies are at risk not only for severe brain damage, but also for death (it is estimated that around 15-20% of infants develop IE).


A lack of oxygen at birth it can, therefore, initiate a series of negative chain processes that cause the gradual death of brain cells with consequent brain damage, a high risk of motor and intellectual handicaps and will require assistance and assistance for most of their life. an often expensive rehabilitation.

Baby cooling and therapeutic hypothermia, what it is

Babies who are born with problems oxygenation of the tissues are currently placed, within a few hours from birth, in the traditional incubator, instead the new therapy provides for a controlled cooling of the body up to 33 and a half degrees. In this way the brain sends fewer metabolic demands and the body has time to recover.

Therapy, technically called therapeutic hypothermia, must be implemented by six hours from birth and lasts for seventy-two hours. The child is kept under very close monitoring both in his brain functions and in his vital functions. There baby cooling provides for newborns to be placed on a special mattress cooled to 33 degrees for three days and according to the results of the study.

According to experts the hypothermic care it is practically the only therapy that allows children born with hypoxic-ischemic encephalopathy caused by a difficult birth or to limit brain damage.

A study published in the New England Journal of Medicine has shown that asphyxiated babies at birth undergoing hypothermic therapy not only improve their chances of growing up without handicap or disability, but also to have a higher IQ in school age. The beneficial effects of hypothermic treatment, therefore, would be long-term.

Recent studies have concluded that thetherapeutic hypothermia it can reduce the possibility of serious brain injury by 25% but it is very important that the therapy is implemented shortly after birth, as soon as possible, because brain cells begin to die within minutes of lack of oxygen.

When and how is theneonatal therapeutic hypothermia? Here are some shared indications:

Audio Video Baby cooling, therapy for newborns who have suffered a lack of oxygen
Baby Moon: the second honeymoon before the baby arrives ❯

add a comment of Baby cooling, therapy for newborns who have suffered a lack of oxygen