Baby game, here's what to make them do from 0 to 12 months 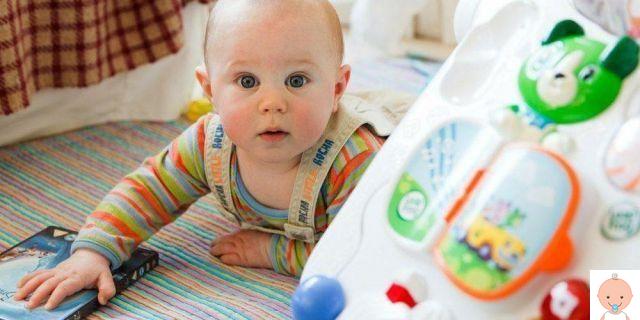 in Infants, game è fundamental for their development. Must not to believe that despite being so small they don't have any need. Far from it! To play with the mum and Pope strengthens the bond and, at the same time, it allows to refine alcune ability important, like prendere the objects in hand or observe them with caution. It is a time di freedom pure in which everything or almost everything is allowed, but clearly each age has his own game more suitable. So let's see what to do do to ours children da 0 a 12 months according to theirs capacity.

DEVELOPMENT AND PLAY FROM 0 TO 4 MONTHS

Even if it seems incredible, the Infants interact with the world external since immediately. The two weeks of life I am capable of to recognize la voice area of mum, that li calm in a second. Within end of first month, the small focuses on face of who it is front, what that Migliora di day in day. The 6 months i begin smiles true, not as simple movement mechanic.

A three months begins to show interest and culture present in western Sicily ". for its body, he discovers the little hands and feet e interacts so more significant with is around him. It is therefore theNow di discover il game. The 16 settimane in fact the objects lo interest more ea 20 can play in truth sense of the term, having fun a lot: yes wave when the mum, to hold a rattle in hand and experiences the position sitting.


Il game can from when the bimbo is more I wake during the day (It's a thing subjective, but that can iniziare soon, also to 2 3-weeks). His role it will not be passive how could you think: feel al center dell 'caution di mum e Pope it will make you feel it soddisfatto: take a look at his little face smiling…

Toys above the cot. There are tons of them! From classic bees to teddy bears you can surely find what your child likes best. Usually, these merry-go-rounds spin and play, attracting the little one's attention. Some may stay there for hours, feeling in company.

Foot massage. Physical contact with the baby is very important, even in play. When you change his diaper, tickle his feet lightly or take his fingers one by one and say their names: this is the hallucion, this is the little finger, this is the second little finger ...

Play with expressions. Put your face close to that of the baby. Talk to him by changing your facial expression depending on the sentence. The expressions you can use are surprise, amazement, happiness.

DEVELOPMENT AND PLAY FROM 4 TO 8 MONTHS

A 5 months il child has a very good control of the movements di hands e piedi, that port smoothly in mouth. He already knows to tend le little hands to try to to grab un object it's at 6 monthsHas securely what comes to him offered. The 7 months becomes clever a transfer un object From one hand to the other and yes fun very much a beat the two what's this between them to feel the noise what are they doing. Obviously the lallation (i.e. i vocalize of the first syllables, ma-ma-ma, pa-pa-pa etc) underline the divertissement.


A 8 months the little one might already to crawl to go to prendere un play or to push le arms to grab it. At this age it can to focus on a object even for several minutes, turning it between hands, carrying it to the mouth (therefore pay attention to thing you give him) or throwing it a land to get it to give back (could go on for ore).

Beat your hands. A timeless classic. In the beginning, you will be clapping his hands, singing the nursery rhyme, until he is able to do it on his own.

Palestrine. Here too a world opens up. There are many types, different in size or shape. All consist of a mat and suspended toys that can stimulate various skills. Many produce music and noises that stimulate children's curiosity (find an example HERE). Some are "closed" so you can rest assured that the little one stays there for a while to play without crawling around.

Cubes. Place 3-4 cubes of cloth in front of him and let him observe them. He will catch them in no time, exploring them carefully and probably putting them in his mouth. Some even have rattles inside. At 8 months, the baby may be able to place them on top of each other, albeit in an unstable manner.

DEVELOPMENT AND PLAY FROM 8 TO 12 MONTHS

A 8 months the little one is sitting without support for various minutes and can try to move slowly for prendere i toys. If a game falls, yes sticks out to see where it's over. TO 9 months is very reactive and loves Songs e nursery rhymes. Around the 10-11 months may be to be able, its precise invitation, of indicate un object simple portrayed in a book. Shakes la forehead to say No. e appreciate very hear i verses of animals followed by theirs name.

To a year il game becomes more complex. Her select the objects and prefer e to discard those who do bored. love it to launch i games far away and expect that the mum them return to start over. Now (smiles a lot and yes angry if, of surprise, the game From hands. In this period begins theadventure of the first passivated.

Games in the bath. Now he appreciates them much more. There is something for everyone between balls and animals that spray water. Give him this chance, especially if he is a very lively child because contact with water has a great relaxing effect.

Ball. Wonderful for any child, the ball can become the absolute protagonist of the game just around 12 months of age. At this time he is not yet capable of catching it and relaunching it, but he can push it with his hands, making it roll on the ground. There are some so-called sensory, different to sight and touch, designed to better develop the senses of children.

The imitations. Towards the year, children are very fond of imitating the gestures of those around them. Play the activity game with them which consists of performing various gestures describing them (raising your arms, smiling, crouching on the ground, jumping, touching their hair) and waiting for them to reproduce them. Obviously in their own way.

add a comment of Baby game, here's what to make them do from 0 to 12 months