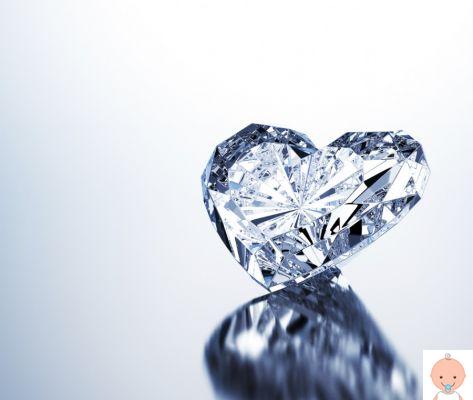 How to choose the right name for the baby? When choosing the name for the unborn child, we often tend to opt for an original name, which in some way has a meaning, which is also a wish for the baby. And choose a name inspired by precious stones it can be a creative choice.

There are also stones that are associated with the months of birth, which in popular tradition were given to the newborn as a good omen. You can, therefore, orient yourself in choosing the name inspired by the stones to give to the child also by scrolling down this list:

Names inspired by the most popular stones

The name is definitely one of the names inspired by the most popular stones, especially a few years ago. It is of Arab origin and means splendor, glitter.
The stone has a characteristic yellow / orange color. It comes from fossilized tree resin, which is why small insects or other impurities are often found inside which make each stone absolutely unique. It is a stone linked to the idea of ​​fire and energy


The name derives from the Greek and means good, virtuous
The stone is born in the depths of volcanoes, it can have many variations of color and according to tradition it is a stone linked to relaxation and serenity of mind

The name has Latin origin and means bud, later it was also associated with the idea of ​​the precious stone.

The name derives from the Spanish Jada, which means "flank stone". Traditionally it was used as a remedy for back pain
The stone is made up of various minerals and chromium which gives it its characteristic green color. It refers to the idea of ​​reconciliation, compassion and love

Read also: How many names can you give to babies?

Names inspired by the most original stones

The name was widely used in the country in the Middle Ages, and was given to girls to wish them the beauty and preciousness of the pearl.
It is not a real stone but a formation that occurs inside the oyster when foreign bodies enter it.

The name is decidedly original and refers to the idea of ​​a sophisticated and bright person
The stone is traditionally blue, but it can also be found in other color variations. Extremely valuable.

The name is of Spanish origin and refers to the precious stone and has a meaning of "hope"
The stone has a bright green color, hence the wording "emerald green", is a very ancient gem loved by the ancient Egyptians.

add a comment of Baby names inspired by precious stones