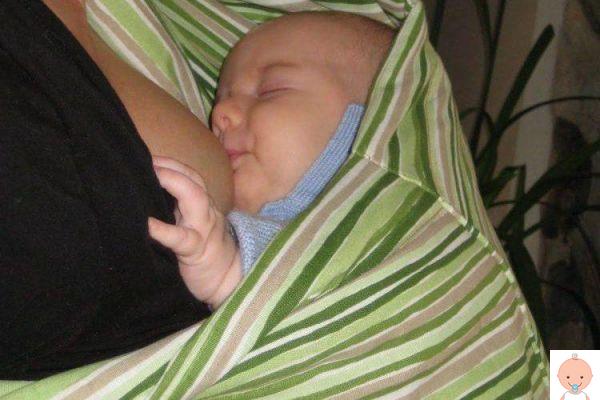 If you are almost at the end of the pregnancy, doing thelist of what the baby will need, don't forget to insert an instrument "life-saving": the baby sling. Physical contact between mother and baby, development correct of spina dorsal, ease of movement for all of you, upright position which improves digestion, greater peacefulness e regularity to feedings e sonno.

They are some of the advantages that offers this "means of transport"For infants and children up to three years of age. An investment in comfort e cuddles which helps both babies and parents.

La baby sling, in fact, it comes from African tradition where the contact between mother and child is deliberately very tight, as for the nine months of pregnancy. The child who is brought into the band handles better reflux andelimination of gas, moreover it is also possible breastfeed the little one while lying comfortably in the band.

I advantages do not end here and there are many also for mothers and fathers: not worn, the baby wraps they take up very little space, leave the hands free to be able to do chores or carry objects and weights or push a passeggino with the other child, like a real other pair of hands at your disposal. Who hasn't wished for it at least once? There band, in fact, you can put front, On shoulders or even on a side.


But that's not all. There baby sling helps the newborn to to relax and thermoregulate, from peacefulness thanks to the comfort of being close to the parent and to the position reminiscent of the one in the belly of the mother and therefore also improves the sonno.

So here we are at the types of band to choose from. The system is basically similar, but i models, for fabric or hooking system, are many and several. Among the most common types, the ad rings mei tai, That elastic is that rigid.

The band ad rings it's probably the one most note: two meters of cloth which are fixed with rings bringing the child to the height of the belly,anca or back. The mei tai it is characterized by being equipped with sling, can be worn on the stomach or back. The band elastic è simple and little cumbersome: can carry children up to a maximum 13 chili and it is used without knots o buckles. The band rigid finally it is similar to the previous one, but less versatile because it is made of a more resistant and rigid material.

Ready now for choice of your baby sling? And for learn quickly like bequeath it and use it in a way perfect, click HERE.

Baby sling, why it is useful and how to choose it ❯

add a comment of Baby sling, a very comfortable "means of transport"