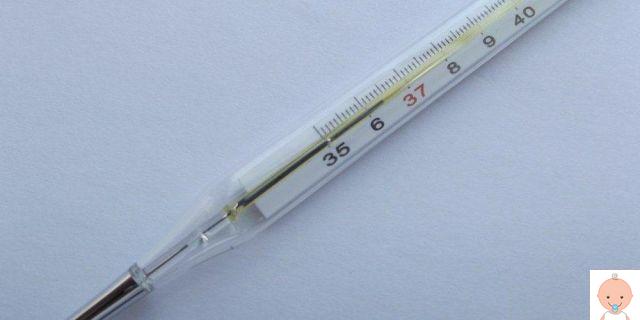 When you decide to expand your family, the priority becomes one: try to get pregnant as soon as possible! Despite all of us we repeat as a mantra that we must not be in a hurry and that pregnancy will come, in our hearts we always hope that this desire will come true as soon as possible. What to do then? We must try to optimize the possibilities of procreation, taking advantage of the opportunities that our body offers us. Put simply, we need to make the most of the fertile period. We therefore want to talk to you about basal temperature monitoring, a method that serves to understand when ovulation is approaching and therefore when you are most fertile.

What is the basal temperature

Basal temperature means the body temperature that is recorded in basal conditions, that is, when you are inactive for a long time, such as in the morning when you wake up. The basal temperature varies during the menstrual cycle and essentially depends on the amount of estrogen and progesterone produced by the body. It is therefore closely linked to the fertility of every woman.

Why measure the basal temperature

If you are looking for a pregnancy, basal temperature measurement allows you to have an idea of ​​when you ovulate, so that you can focus on sexual intercourse in those days. Remember that, however regular your menstrual cycle may be, ovulation may not always occur on the same days. We must therefore be good at recognizing the various symptoms that arise. And in this the basal temperature can be a valid help.


How the basal temperature changes in the menstrual cycle

Start taking your basal temperature from the first day of your period. At the beginning (during the follicular phase) it will have an average low trend due to the low amount of estrogen and progesterone. After menstruation their level begins to rise and the temperature varies between 36,3 and 36,9 degrees (attention: obviously these are estimates, but then everything is subjective). The peak of estrogen production causes a sudden drop in basal temperature, even half a degree from the previous day. Ovulation is approaching and it is a good time to have intercourse.

Ovulation corresponds to a significant increase in progesterone which raises the basal temperature up to 37-37,3 degrees. If conception is successful, it remains high because progesterone continues to be produced in large quantities, while otherwise it drops again near menstruation (36,3-36,5 degrees).

How basal temperature is measured

First rule if you intend to start measuring the basal temperature to get pregnant: regularity. The measurement must be made starting from the first day of the cycle (therefore the first day of menstruation) every day always at the same time, in the morning as soon as you wake up, before getting out of bed and doing any other activity. It is very important to be consistent in this operation. If there are time variations, mark them on the graph we will discuss in the next paragraph.

You obviously need a… thermometer! There are specific ones for basal temperature, but you can safely use a mercury one (if you still have one, since they have been removed from the market) or digital. The temperature can be taken vaginally, rectally or orally. However, the latter method is not considered as effective as the other two. Once you have chosen how to measure the temperature, you must always use that.


The temperature must be marked on a graph that will allow you to evaluate its trend also visually.

This table is very simple to make and fill out. The recorded temperature is marked on the vertical axis, while the days of the month on the horizontal axis. Join the temperature points and observe the line. The trend is biphasic: a first phase with a lower temperature and another with a rise. You will then notice a significant drop on the day when estrogen peaks and then the next rise. If the temperature remains high even after ovulation, it is very likely that the pregnancy has begun.

First let's see what anovulatory cycle means, even if it is not particularly difficult to understand. A menstrual cycle is called anovulatory when ovulation does not occur. The causes can be various: advancing menopause, food problems such as anorexia, thyroid dysfunction, polycystic ovary syndrome, excessive stress, too intense physical activity, hormonal problems.

By monitoring the basal temperature, in the event of an anovulatory cycle, you will see how the graph has a more or less constant or "roller coaster" trend, ie with insignificant variations. For example, there will be no rapid decline followed by the rise. This month, therefore, the search for a child will unfortunately be fruitless.

What affects the basal temperature

Some factors can alter the basal temperature, thus making the measurement unreliable:

Other symptoms of ovulation

The rise in basal temperature is just one sign that ovulation is taking place. In fact, there are other very specific ones that give the same information. One of these is for example cervical mucus. Its consistency changes on fertile days, becoming more stringy and sticky, a bit like egg white. In addition, the cervical mucus is more abundant, giving a wet feeling.

We do not notice it, but there are also changes in the uterine cervix. Your gynecologist can see this if you are monitoring ovulation. In the ovulatory phase, the cervix is ​​higher, open and soft. These days the desire to make love with a partner also grows. All thanks to estrogen which increases libido.

Some women undoubtedly recognize ovulation because it comes with various kinds of aches and pains. Painful ovulation (also called “mittelschmerz”, mid-cycle pain) occurs at the same time as the ovary releases the egg. Abdominal pain can last a short time, just a few minutes, or be more lasting. Sometimes it is accompanied by nausea, fatigue, light bleeding, and swelling of one or more inguinal lymph nodes.

Time's up, but the baby doesn't want to be born. What to do? ❯

add a comment of Basal temperature, why and how it is measured