Because Sant'Anna is the protector of pregnant women 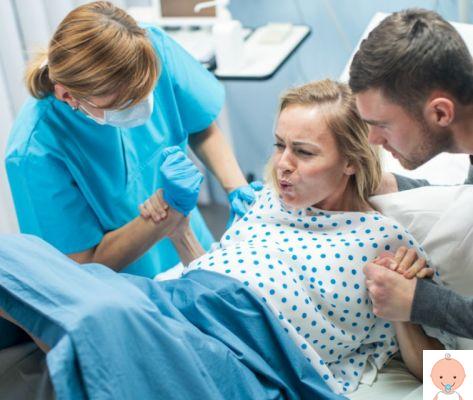 Considered by the Christian tradition the wife of Joachim and the mother of the Virgin Mary, Anna is venerated as a saint and invoked as the protector of mothers and pregnant women. Her name comes from the Hebrew Hannah and means "grace". There is no trace of her in the Canonical Gospels, but instead the Apocryphal Gospels recount her: Gospel of Matthew, said of pseudo-Matthew; "Protovangelo di San Giacomo", the oldest written around the second century. But what is her story?

Read also: Prayers for pregnancy and patron saints for mothers and children

The story of Sant'Anna

Joachim, a shepherd who lives in Jerusalem, is an elderly priest and is married to Anna. The two loved each other very much, but they have no children and by now given their age they would not have had any more; according to the Jewish mentality of the time, the high priest saw the divine curse on them, that is why they were barren. The elderly rich shepherd, for the love he brought to his wife Anna, did not want to find another woman to have a child; then saddened by the words of the high priest, he went to the archive of the twelve tribes of Israel to verify if what Reuben said was true and once he realized that all the pious and observant men had had children, upset, he did not have the courage to go back to home and retired to the mountains and for forty days and forty nights she begged for God's help amid tears, prayers and fasting.
Anna too suffered because she could not have children, to which was added the suffering because her husband did not return home; she then she began to pray intensely asking God to grant their plea to have a child.

One day while Joachim is working in the fields, an angel appears to him, announcing the birth of a son and Anna also has the same vision.
During the prayer an angel appeared to her and announced: "Anna, Anna, the Lord has heard your prayer and you will conceive and give birth and your offspring will be talked about all over the world". So it happened and after a few months Anna gave birth.

Joachim brought his gifts back to the temple: together with the child ten lambs, twelve calves and one hundred spotless kids. Later Mary is taken to the temple to be educated according to the law of Moses.

The invocation of St. Anne

Sant'Anna, which is celebrated on July 26, is invoked as the protector of pregnant women, who turn to her to obtain three great favors from God:

She is the patron saint of many trades related to her functions as a mother, including laundromats and embroiderers.


Prayer to Saint Anne
O Lord, by intercession
of S.Anna mother of the Madonna,
I ask you to accompany me in this time
gestation of the creature you have
wanted to make it live in my bosom.
Thanks, because you chose me
for this very important task:
to be the mother of a new creature,
and so collaborate
with you Creator.
O Lord, by intercession
of S. Anna, make the creature that is in me,
is a gift that makes the
my family and a blessing to all.
Let the expectation of birth help us to be
generous and persevering
in faith and charity.
AMEN

The devotion to the Virgin Mary was so great that, with the passage of time, sanctuaries were born also in honor of the mother whose cult developed from the XNUMXth century onwards, reaching its maximum diffusion in Brittany. The first Breton pilgrimage site, Ste-Anne d'Auray attracts thousands of pilgrims and tourists from all over the world every year.
Why don't mother-in-law and daughter-in-law get along? Problems and possible solutions ❯