Belly pain in pregnancy: what to know and how to behave 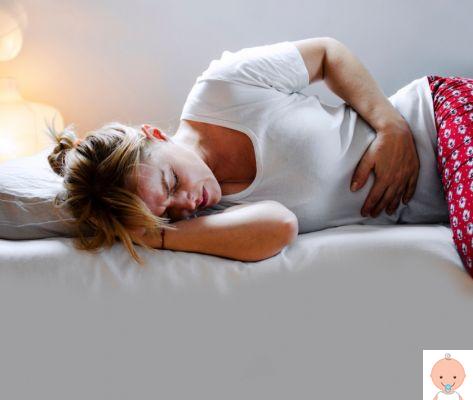 Belly pain in pregnancy is a fairly common symptom during pregnancy nine months of gestation, and most of the time it's perfectly normal and needn't worry the expectant mother. If the pain becomes acute and persistent, and is also accompanied by blood loss, fever, weakness or other ailments, it could be a sign of something more serious and should therefore not be underestimated. It is advisable to always contact your doctor and gynecologist and avoid self-diagnosis which could worsen the situation.

Let's try to understand the causes and symptoms of stomach pain during the different stages of pregnancy and when you need to be alarmed. What is the difference between abdominal pain that occurs in the first weeks or in the early pregnancy and a stomach ache more intense at the end of the nine months.

At the beginning of pregnancy, there are some symptoms that a woman may experience aches and cramps in the lower abdomen, easily confused with typical premenstrual discomfort, if you have not yet taken the test and do not know you are pregnant. This tension in the lower abdomen it is caused by the growth of the uterus preparing for pregnancy after conception has occurred. The blood supply increases, the blood vessels dilate causing the famous cramps.

Stomach pain in the second and third trimesters

The stomach ache and abdominal pain they may also be felt during the other months of pregnancy. Here are the most common causes:

During gestation many organs undergo alterations and the gastrointestinal system is among those most affected by these changes. Constipation can be caused by increased water needs and usually by hormones, which slow down digestion.

The main causes are to be found in hormones such as progesterone and the high level of estrogen which cause dilation of the uterus and swelling of the abdomen. Poor nutrition, eating too quickly, or anxiety can also cause belly swelling resulting in a stomach ache.

They are perfectly normal if they are mild and short-lived.

Belly pain and diarrhea in pregnancy

Belly pain in pregnancy can also be accompanied by Diarrhea and in this case the causes can be found in the digestive disorder typical of the first weeks of pregnancy. On the other hand, if gestation is advanced, diarrhea can be caused by pressure of the uterus on the abdominal cavity and on the intestine and consequently the food is assimilated with more difficulty. However this disorder can also be triggered by viral or intestinal infections, or from an incorrect diet.

Belly pain in pregnancy in the fourth and fifth month

Belly pain in pregnancy in the third trimester

If stomach ache occurs at the end of pregnancy it can be caused by contractions beginning of labor, accompanied by pain in the kidneys and tension in the belly and in this case it is advisable to go to the hospital immediately.

Belly pain in pregnancy, when to worry

Belly pain during pregnancy can be the sign of a more serious ailment when it is persistent and acute and if it is also accompanied by blood loss other than implantation. It could be the onset of premature labor, ectopic pregnancy, miscarriage, urinary tract infection, placental abruption, or pre-eclampsia. It is necessary to go to the doctor or your gynecologist to evaluate the symptoms and determine the causes of the pain.

Back pain in pregnancy, how to fight it ❯

add a comment of Belly pain in pregnancy: what to know and how to behave