Biochemical pregnancy: symptoms, causes and how to behave 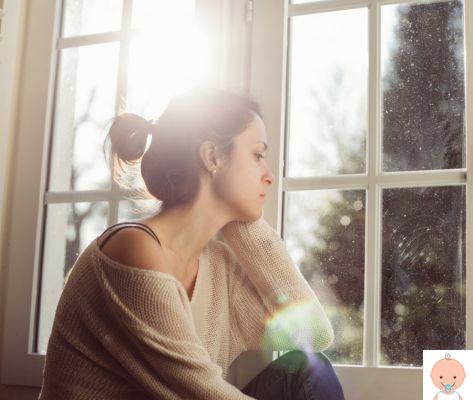 La biochemical pregnancy it is an event that we can classify among very very early abortions. What basically happens is that the egg has been fertilized and has begun its journey to the uterus. It implants itself in the wall of the uterus like a normal pregnancy but after a few days it stops growing. So basically the biochemical pregnancy, also called biochemical abortion or microabortion it is the end of pregnancy in an extremely early period, very shortly after discovering the pregnancy.


From a physical point of view, biochemical pregnancy does not imply any problems, but certainly from a psychological point of view it has an important weight and often rediscovers fears about one's future and one's ability to have children. In this article entirely dedicated to biochemical pregnancy I will try to shed some light and to reassure everyone a little about the expectations for the future.

Symptoms of a biochemical pregnancy

In reality, there are no symptoms that can be specifically indicated as referring to a biochemical pregnancy. It is characterized in fact by a symptomatology completely similar to normal pregnancy, or to a total absence of symptoms (it should be noted that even many women who carry the pregnancy to term have never suffered from nausea, etc. etc.). Moreover, biochemical pregnancy is often confused with a delay in the cycle, precisely because it occurs in the imminence of implantation, therefore about 4-5 weeks after the last menstruation. Many women therefore neither know nor will ever know that in reality that delayed period was a pregnancy. Only in some cases there is fatigue and a sense of irritability or mood changes that did not occur before, but often this is associated with a period of particular stress and certainly not due to symptoms of a pregnancy that is not even suspected to be in progress.

The only way to realize that you are actually pregnant and have therefore undergone an early abortion is that a test has been carried out and that it is positive. I try to explain myself better, in women who are looking for a child or who have entered the assisted reproduction program, often on the first day of delay or after 8-10 days from the embryo transfer, a test is carried out, a beta-hcg dosage in the blood.


The result of this test is positive, precisely because fertilization has taken place and the pregnancy has begun. The appearance of blood losses a few days after the test, however, puts you in alarm, so a dosage of beta-hcg will be performed again, which will be negative. There is no real initial beta-hcg value that can make us say "attention, we could be facing a biochemical pregnancy". Even low initial values ​​are usually interpreted as an early pregnancy, that is, onset later than expected. The second value of beta-hcg is essential for making a biochemical diagnosis of pregnancy.

Causes of a biochemical pregnancy

We don't know for sure what causes biochemical pregnancy. Like all spontaneous abortions and even more so in this case, when the embryo is too small to be seen with ultrasound, we often have no idea why it happened. We can speculate that, being the biochemical pregnancy a very early miscarriage, there have been genetic problems. That is, that the embryo was so compromised from the genetic point of view that it prevented it from surviving, or that there was an incompatibility of genes between the mother and the child.

The search for the cause of abortion is often the only thing we can attach ourselves to in order not to feel that we have done something wrong, not to feel guilty. It is an absolutely physical defense process, but I can say that obviously neither parent did anything wrong in the event of a biochemical pregnancy. Nature simply analyzed the situation and understood that perhaps it was not the case for this embryo to survive, or it would have had a life that was too complex and with different diseases. Not having a certain cause I really like to think so, certainly it does not take away the pain and disappointment especially for those who have been expecting a baby for a long time but at least it gives a little more serenity.

What to do in case of biochemical pregnancy?

The answer to this question may seem rather trivial, that is, nothing should be done. This type of abortion being so early usually does not require any kind of external intervention and tends to resolve itself in a few days. The bleeding will mimic your period and then last 4-5 days and then disappear completely. Neither surgical curettage nor the administration of abortive drugs are therefore necessary since nature takes care of it alone.

The menstrual cycle after a biochemical pregnancy

Although the pregnancy ended early, the typical hormonal changes still occurred, so it is quite common for the cycle following the biochemical pregnancy to be slightly delayed. As a timing it is said that on average it reappears 40 days after biochemical abortion. The doubt now arises spontaneously, but if I do not know that I have had a biochemical pregnancy, how do I behave? The problem of menstrual delay arises rightly, all this can be solved in two ways. If you do not want to become pregnant right away, the test is performed and if it is negative you can rest easy. If, on the other hand, a pregnancy is desired, we can also wait 42-44 days from the last menstruation (which in reality was the abortion) to perform a new test. I always recommend the dosage of beta-hcg on the blood as a test precisely because it helps us in these cases of doubt to know if a new pregnancy is actually in progress or not. And the fact that this type of test is positive before the urine test helps us to face situations early.

Biochemical pregnancy when to try again

It often happens to me that mothers, even on the forum, ask me when to get pregnant after a miscarriage because they want a baby so much. The case of biochemical pregnancy does not differ from other abortions, so I normally recommend wait for the next menstruation to return and then try again. At the origin of this advice there is a reason, the hormonal changes due to pregnancy have however altered the balance between estrogen and progesterone and therefore it is possible that ovulation in the month immediately following the abortion does not occur.

On the other hand, once menstruation returns, the cycle will resume exactly as before the biochemical pregnancy and therefore ovulation will be much more likely in the typical times of the menstrual cycle of that specific woman. This does not mean that there are no particular contraindications to trying again immediately. Given the fact that most women do not know that they have actually had an early abortion, if she tries again immediately she risks nothing, neither she nor the possible child. It will simply be less likely to become pregnant immediately, but we are talking about probability so it is not impossible.

In conclusion, biochemical pregnancy is certainly a sad and heavy event from a psychological point of view, especially for those who have been trying to have a baby for a long time. Like other later abortions it is a bereavement to be worked through, perhaps somehow the fact that in many cases it is not even known is a form of protection of our well-being by nature. But these are explanations that we often want to believe in order not to suffer too much. It is an event that unfortunately happens but I would like to reiterate again that it is not the mother's fault nor this mother will not be able to have children in the future, it is only a life event and as such we should try to treat it.

Pregnancy: how to tell if it's going well ❯

add a comment of Biochemical pregnancy: symptoms, causes and how to behave