Birthmarks in pregnancy: how much is it true? 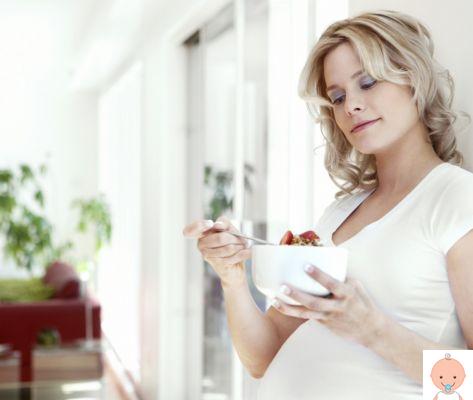 A sudden craving for sweet or salty in the middle of the night. They are popularly called 'cravings'and are very well known to most women who have had children. The cravings in pregnancy are sudden, irresistible, urgent desires for some food in particular that make us nervous, irritable and capricious at least until they are satisfied.

To heed the lpopular eggends handed down from mouth to mouth or to our grandmothers, if these desires are not satisfied quickly and the future mother remains, in fact, with the 'desire' for something, the child will be born with that desire in the form of stain on the skin which, due to its shape and color, will remember the much desired food, there will be whitish spots if the desire was for milk or small dark growths if the preference was for blackberries. Obviously (and thank goodness ...) doctors and science in general deny all this; there is no connection between the baby's skin spots and the mother's food tastes .. those spots are just 'angiomas'.

However, the mystery remains as to what really causes these particular desires which, however, exist in pregnancy and how! There psychology he tried to explain them with a theory that sees in cravings the expectant mother's need for pampering and reassurance in a moment as important as it is delicate for her.

Medicine, on the other hand, explains them as the consequence of storm of hormones which affects women especially in the first months of pregnancy and to which the body reacts with all that series of phenomena, or should we say disorders, including nausea, stomach problems, poor or overwhelming appetite or the so-called 'dreamy gastronomic state', that is, the disordered change in food desires, which causes foods that were previously loved to be rejected with disgust. It will increase the craving for food particularly sweet or particularly salty, or perhaps acids that were not part of our eating habits before.

We do not know which of the two explanations is the most reliable but we recommend, as far as possible, and with an eye to the scales, to satisfy these wishes, perhaps taking away the whim at least in these nine months, of seeing our partner running at three in the morning, desperately looking for a sour cherry ice cream or a slice of four seasons pizza ... or, I know, maybe two tagliolini al truffle, because the cravings can be of anything!

Birthmarks in pregnancy and itching

Itching on the belly is a fairly common symptom of pregnancy. It is thought to be caused by hormonal changes and the stretching of the skin that dilates and stretches more and more as the baby and the baby bump grow. Generally if the pruritus it is associated with a sudden urge to eat, we tend not to scratch, because we think that by touching or scratching the baby will be born with an angioma on the skin, in the same area where we scratched. In reality, as mentioned, there is nothing true and it is just a curious and somewhat bizarre legend that is handed down from grandmother to granddaughter.

How long does it take for birthmarks in pregnancy?

Cravings, or rather those particular desires for this or that food, are not a problem and do not represent a pregnancy disorder. Some future mothers never have them, others immediately change their tastes at the table, hate some smells coming from food and cooking, eat only one type of food or prefer sweet or salty flavors in particular. The sense of taste changes during pregnancy, and the foods you used to like may no longer be as popular. It could appear as early as first weeks of pregnancy an obsessive desire to eat chocolate, dairy products, meat, salads, in short, the cravings in pregnancy are very different and they are many and it is good to indulge them (unless you end up eating only chocolate or getting too fat) because the body could need some nutrients contained in these foods. In short, in conclusion we can say that food during the nine months has a double value:

add a comment of Birthmarks in pregnancy: how much is it true?