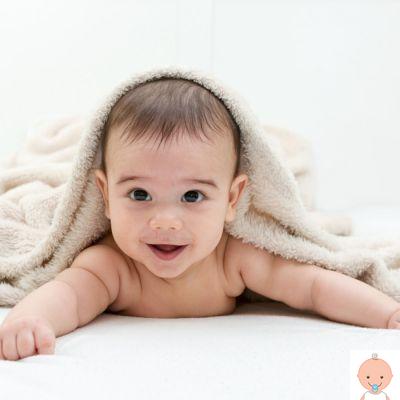 Brian (or Bryan) is a male name of English and Irish origin that has enjoyed some popularity throughout Europe, including the country, in recent years. In this guide we discover what is the origin, the meaning and the spread of the name Brian for child.

What is the meaning of the name Brian

It is not clear what theorigin of the name Brian however it is hypothesized that it could go back to the Celtic word bre, which means Hill, but also - in a broader sense, noble, tall.

Bryan is an English and Irish variant of the name Brian. The origin and the meaning are the same.

La female variant of Brian, on the other hand, is Briana, but also Bryanna.

What is the spread of the name Brian?

The name Brian was very common since ancient times in Ireland, but the legendary Irish king contributed to its spread and popularity over the centuries Brian Boru, who repelled the Vikings in the XNUMXth century and was killed in the Battle of Clontarf.

In England it was introduced in the Middle Ages, but only in the twentieth century did it have a real explosion of popularity.

In el country, according to i ISTAT data relative to the most common names, in 1999 Brian 112 babies were called and in 2022 the trend remained substantially unchanged with an absolute value of 108.

When is Brian's name day?

The name day is generally celebrated on 12 March in memory of King Brian Boru.

Brian Bórumha mac Cennétig fu supreme ruler of Ireland from 1002 to 1014. He is known as the first king of Ireland and the story tells and focuses mainly on the extraordinary battle of Clontarf, during which the king died to defend Ireland from the attack of the Viking army.

The story goes that Brian Ború played the harp, his son Donogh, during the pilgrimage to the city gave the harp to Pope Alexander II 1064. Only after the schism between the Catholic and Protestant church, the harp returned to Ireland and to eventually came to William Conyngham who eventually donated it to Trinity College, where it is still kept today.

Brian is a strong man but difficult to understand because his personality is complex and made up of two opposite aspects: on the one hand he is nervous, reserved, shy, sometimes even inhibited, on the other hand he is very passionate and virile.

Individualistic, Brian is a man with a great sense of duty, but at times he is unpredictable and can withdraw into himself, into a deep loneliness that is difficult to understand. He has a highly developed intuition, but diplomacy and the ability to communicate are not his forte.

He knows no half measures: he loves or hates a lot, he commits himself with all his energy to a project or a task or, on the contrary, he is completely disinterested in it.

He likes shine, be watched, admired, lead by example and don't hesitate to use his innate theatrical sense.

Brian is demanding by nature, he doesn't appreciate people who don't take him seriously. It has no half measures and is very rigorous, which is why it is capable of carrying out even very ambitious projects. He is lively, he loves to reflect, deepen, philosophize, he is precise, orderly, he always wants a job well done. He is confident and reassures those around him, has a good sense of humor, is nice and charming.

What profession will Brian do? Given his multifaceted personality, the possibilities are different: he will prefer professions related to power and money, or those in the police, sports, industry and business.

What zodiac sign is associated with the name Brian?

Sagittarius is the zodiac sign that best defines Brian's personality. Natives of this sign are known for their optimism.

What is Brian's precious stone?

Lo sapphire is the gem that best reflects Brian's character traits. This stone stands out for its great finesse and its brilliant color that favors dynamism and energy.

Which color is associated with Brian?

Il blu is the color associated with the name Brian: it symbolizes wisdom, serenity and dreams. It also refers to a taste for travel and adventure.

Brian's lucky number is8, which represents a powerful constructive and constructive capacity and favors the pursuit of lasting results.

What song should you dedicate to Brian?

We chose The Brian's Song, the soundtrack of a very famous TV movie in the seventies