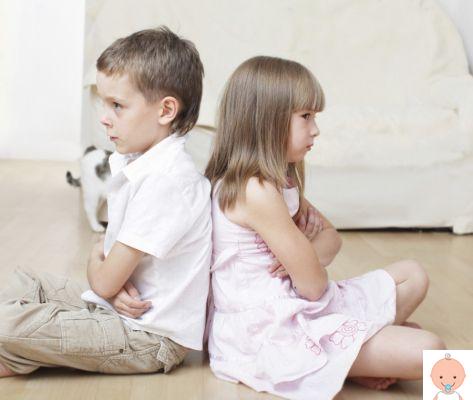 In the beginning there is peace, they play together, they seem to adore and have fun. They talk and laugh. Then all of a sudden, hell. Inhuman screams, fights, tantrums and bullying. It is the typical script of the quarrel between siblings.

One of the underlying causes of these small, daily quarrels is certainly the feeling of jealousy. It is quite a frequent phenomenon that the elder brother, out of jealousy towards his brother or younger sister, does not miss an opportunity to make the latter the victim of numerous spite.


In this case parental love is at stake, of which the eldest may feel cheated, even if he himself has long desired the arrival of a little brother. Sometimes, however, it is the minor who out of jealousy of his brother or sister who plays with a friend begins to behave in an unpleasant way, for example by shattering the lego house that they have patiently built!

What not to do

Because these small daily quarrels in reality, if managed in an emotionally competent way, can become a real life training ground for the little ones. It is natural that for this to happen an effort on the part of the parent is required and that the chances of success of the negotiation also depend very much on one's usual way of managing the conflict, prevarication, injustice.


Even if the triggering reason for the dispute is who will have to eat the last slice of tart, it is good to remember that the resolution of a conflict does not always have to see a winner and a loser. There are cases in which neither party loses, where motivations can be confronted in a peaceful way and where competition can give way to cooperation, at least in the family!

The development of the so-called Social skills, those which in the scientific literature are generally found more in subjects with siblings than only children and which are well correlated with numerous adaptive personality traits, starts from early childhood precisely through the correct conflict negotiation.

The parent's task, therefore, is not so much to behave as an arbiter, but as a mediator, which, without taking sides with anyone, promotes respectful and mutual listening to the motivations of the other's behavior, the verbal expression of the feelings experienced and the negotiation of a solution that is advantageous for both parties.

Read Also: How To Encourage Friendship Between Siblings Also Read:

Once these principles have been learned by children it is better to get out of contention and let it be resolved on its own. The advice is to intervene as little as possible in questions between siblings, especially when the age of the children increases, and with it also the property of language, reserving direct intervention only for cases in which physical safety is at stake: diplomatic manners seem to have been set aside here, but even after a fight it is important to stop and reflect on what happened, on the reasons that triggered the anger, substituting the words for the beatings

Video: Quarrels between brothers. What to do? Daniele Novara answers

In this video Daniele Novara Pedagogist and Founder of the CPP, talks about the conflicts between brothers and sisters. When is it right to intervene and what to do?

Little brother yes or no? Moms and experts think so ❯