Calendar of weeks of pregnancy and nine months of expectation 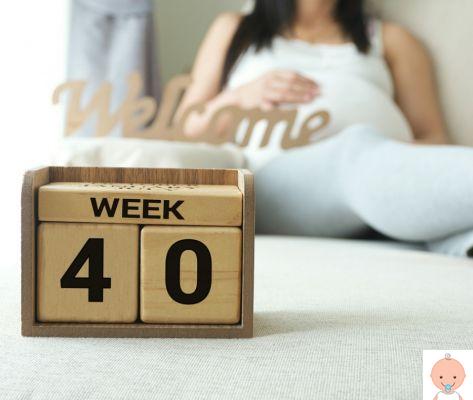 Pregnancy lasts on average 40 settimane, because gynecologists calculate the duration of gestation starting from the date of the last menstruation (since you can never be sure when conception took place precisely).


Here the calendar of 40 weeks of pregnancy with advice on health, nutrition and tests to be done during the nine months. You will also be able to find out about the changes in the mother's body, how the baby bump grows and how the fetus develops.

During the nine months the embryo, which initially measures just a few millimeters, grows rapidly to become a fully developed fetus.

Development of the fetus | PHOTO

Weeks of pregnancy how to count

How to make a calculating weeks of pregnancy? As we said, pregnancy does not really last nine months, but about 40 weeks that start counting from the last menstrual cycle (gestational age), because you can't be sure of the precise date of conception (conception age). So it can be said that pregnancy actually lasts 38 weeks (the nine months of gestation) plus the two weeks that are calculated from the last menstruation. Indeed, gynecologists do not examine pregnancy and fetal development in terms of months, but in terms of weeks.

What week am I?

Here is a table to understand what week we are at

If you want to do a pregnancy week calculation and if you don't remember what week you are, use our calculator to find out where you are in your pregnancy and when your baby is born: just enter the date of your last menstruation and the average length of your cycle to get the information you need. The gynecologist instead, to make a week pregnancy calculation, will use a obstetric rule.

Starting from first week of pregnancy, you can follow the growth of the fetus and how the body of the future mother changes until the 40th week, when the date of delivery is expected. In sequence all the useful information on the forty weeks of pregnancy, in the articles a lot of information on the development of the baby, on what is happening to your body and useful advice on the tests to be done based on the calculation of the weeks of gestation.

Read also: How to calculate the date of delivery

Although gynecologists use to calculate pregnancy by weeks and not by months, the fact remains that traditionally pregnancy lasts nine months, of expectation, emotions, fears and adrenaline that rises more and more until the fateful moment of approaching the presumed date of childbirth. And each month has its own specific characteristics, in the first three months there is the discovery of the positive pregnancy test, the first beta Hcg that always put us a little fear, the first ultrasound in which we hear the heartbeat of our baby for the first time and the first tests to do, three months in which there is always the fear that pregnancy will suddenly stop due to a miscarriage and in which nausea can be really annoying. The second quarterand it is a beautiful time, you have not gained too much weight, you begin to communicate the news to friends and family, you feel good because the nausea has passed and you begin to think about the name of the child. It is also the period in which important tests are carried out, such as morphological ultrasound or amniocentesis and thanks to which we will discover the sex of the baby. L'last quarter it is perhaps the most tiring, the belly is large, the baby begins to weigh, we feel more tired and fatigued and the desire to hold our little one increases more and more.

So here's how the pregnancy month by month.

Weight in the weeks of pregnancy

It is very important to keep the proper weight during and 40 weeks of pregnancy. Putting on too many pounds not only makes the expectant mother more fatigued, but can increase the risk of preeclampsia, excessive birth weight, cesarean delivery, and diabetes.

On average it is recommended not to gain more than 12-14 pounds during the nine months, and in the first weeks of gestation there is no reason to put on weight. Even if you have an irrepressible desire to eat and nibble something, try to stop and take care of your diet by favoring healthy and balanced foods, which are not too rich in sugars and fats.

Recall that in the first quarter weight gain should be negligible, while starting from the twelfth week of gestation they will begin to gain  400-500 grams per week.

With our correct weight calculator it is possible to understand how the pregnancy is progressing and if we are putting on too many pounds.

Exams to do in pregnancy

During the 40 weeks of pregnancy it is necessary to carry out some medical examinations to check your health and that of the baby, to know the sex of the baby, the expected date of delivery, etc. During the three trimesters of pregnancy there are mandatory exams and optional or recommended exams to do.

Symptoms of pregnancy vary from woman to woman, but some signs are the same for everyone, such as amenoration or missed periods. Other signs that occur during 40 weeks of pregnancy include implantation losses, breast tension, fatigue, constipation, abdominal heaviness, nausea, frequency of urinating more often, increased basal temperature. etc.

The Chinese calendar is nothing more than an ancient table found in a Beijing tomb dating back centuries and which is now kept at the Chinese Institute of Science.

According to this table, it is possible to know in advance the sex of the child simply by cross-referencing the age of the mother at the moment of conception with the month of conception. And the result would have an accuracy that reaches 93%.

Ultrasounds to be done in the 40 weeks of pregnancy

The ultrasound scans to be done during pregnancy are part of the necessary tests to be performed during the nine months of waiting. The first ultrasound to be done within the first trimester, the morphological (between the 20th and 22nd week) and the ultrasound that is performed for the evaluation of fetal growth (between the 30th and the 32nd) are "offered" by the National Health Service , and they are not paid if they are done in public facilities.

Weeks of pregnancy and fertile period

Since it is not possible to know for sure on which day the conception the weeks of pregnancy start counting from the first day of the last Menses. However, the conception took place in the previous days, in the middle of fertile period which generally corresponds to a time window of two / three days between the fourteenth day after menstruation.

Pain in the lower abdomen is quite frequent throughout gestation. At first they are caused by the implantation of the embryo and then by the progressive changes of the uterus that is welcoming the growing child. Then, towards the end of the pregnancy, the contractions preparatory. But it is also quite common to suffer from gastritis.

Although the stomach ache in pregnancy it is common, any severe and persistent pain or regular aches that become more and more frequent at ever shorter intervals should be reported to your doctor.

A beautiful video that is very exciting especially if it is seen by a pregnant mother because it shows the various stages of development of the fetus in the mother's womb.

How many weeks of pregnancy are there?

Counting from the first day of the last menstruation, the pregnancy lasts about 40 weeks

How are the weeks of pregnancy calculated?

The weeks of pregnancy are calculated from the first day of the last cycle.

When can the first ultrasound scan be done during pregnancy?

The first ultrasound is done in the first trimester of pregnancy. It takes place between 6 and 14 weeks of pregnancy. Around the seventh week, a tiny dot can be seen. From the tenth-eleventh week the expectant mother will already be able to see the heart and the fetal appendages

What are the ultrasound scans to do during pregnancy?

How many weeks are 3 months pregnant?

Audio Video Calendar of weeks of pregnancy and nine months of expectation
Lunar calendar: how it affects the sex and date of birth of the baby ❯