Can daddy's mood cause problems in children's emotional and cognitive development? 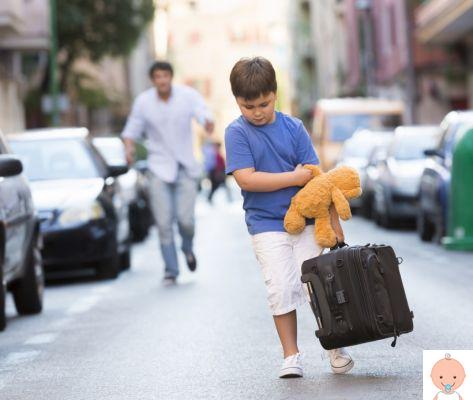 Discontent of the father and consequences on the child

The emotional bond and behavior of both parents they affect the child's emotional and cognitive development alike. Like the maternal figure, towards which the little one turns especially between the first months up to 6-8 ° and beyond, also the father contributes to growth becoming an indispensable point of reference. It is precisely by virtue of its importance that moodiness, or any other psychic disturbances, can cause problems in the child.

The emotional and social development of the child

The first emotional ties, defined as 'attachment', constitute models for the little one to internalize and then become his own way of relating. At each call of the child, the parent, more often the mother and above all the first months, responds in a more or less suitable way, satisfying his needs, whether they are nutritional, care or affective. Thus the child develops the relationship of trust on which he relies and, as he grows up, he will internalize this bond that will allow him to feel safe when the reference figure will not be there and this will allow him to extricate himself in social relationships. It is therefore essential to establish a meaningful bond with your child, but above all to respond coherently to his needs of whatever nature they may be.

Read also: When the father is absent

The role of the father in the family

Although the roles within the family and the couple have become interchangeable, the paternal function has always had the character of autonomy and independence. Indeed, within the mother-child bond the father helps his partner to detach from the son and to sever the umbilical cord of the symbiotic bond they have structured, thus allows the little one to differentiate himself from her. When the father is absent or has mood problems, the mother becomes the only safe haven. At the same time, her problem inevitably falls on her son's emotional and cognitive development.


There are several factors that can give rise to a father's moodiness, including environmental and work stressors, particularly significant emotional experiences, genetic factors (we refer to more important pathologies) and many others. A group member, depressed, tends to burden the whole family and not just the individual who may be the partner. Those who live with a sick person or with emotional or character difficulties will tend to influence the mood of all members including the child.

Symptoms such as apathy, apathy, isolation, estrangement through an attitude of refusal of contact or relationship, constant nervousness that is expressed with anger, aggression and mistreatment are not understood by a growing child especially if no one explains it to him.

Effects on the child: why does dad answer me badly?

There may be several situations in which a child feels he is not accepted and, consequently, develops a series of emotional and cognitive problems. Feeling guilty, having relationship and emotional difficulties, developing language disorders are some of the ailments that the child can manifest.

The case of Marco

Marco is a 32-year-old man who comes to the office because he suffers from erythrophobia and anxiety. He is very agitated and sweats a lot. We understand that he struggles to express his discomfort. But his courage pushes him further. He says that since he was a child he was the scapegoat for paternal discontent enough to suffer from panic attacks and social phobia. Every slightest hint of paternal frustration corresponds to an attack on his self-esteem and his existence. The slaps and insults are not lacking whenever he tries to express himself freely and spontaneously so that his ability to show himself is strongly inhibited by the paternal injunctions. A big fat man who intimidates him and prevents him from growing emotionally and cognitively. In fact, as early as elementary school, he begins to suffer from stuttering and his teachers also notice a difficulty in reading and writing.

But thanks to his 'intelligence and emotional strength' and to the various maternal attempts to intervene to defend him, he manages to become an adult albeit hiding and always looking for isolated places and jobs that do not expose him too much to others. He is afraid of going red and this causes him considerable discomfort as it is something he cannot control. In those circumstances, when he happens, he feels a rapid heartbeat and a dizziness that gives him a feeling of loss of balance. In fact, he always uses a cap with a visor that allows him to hide his face.

Conclusions: It is clear that we do not necessarily arrive at extreme cases like this, but infantile sensitivity cannot be measured except by following it as it grows. During the evolution of his personality, the child assimilates everything that surrounds him, first of all the type of relationship that his parents establish with him, therefore he will tend to experience the attitudes and emotions of his loved ones becoming his main affective model. If the father's contribution is deficient, his behavior will result, on the social level, less collaborative and will manifest emotional difficulties and a poor esteem linked to his deep insecurity. To use a metaphor, there would be no pillar on which to rest and forge one's personality.

It is therefore important for a parent, in this case a father, to face their difficulties separately, perhaps by turning to a professional and opening up on an emotional level by manifesting their difficulties. It is also true that this is not always possible and then it is good explain to the child the difficulty the parent is going through at that moment, so as to make him aware that this does not depend on him, thus avoiding the onset of feelings of guilt and emotional experiences that he himself is unable to explain. Within the family it is essential to show a certain balance and to be a safe haven in which to anchor the boat when in difficulty.

Massage during pregnancy as a pampering and skin protection ❯

add a comment of Can daddy's mood cause problems in children's emotional and cognitive development?