Can I fly when pregnant? 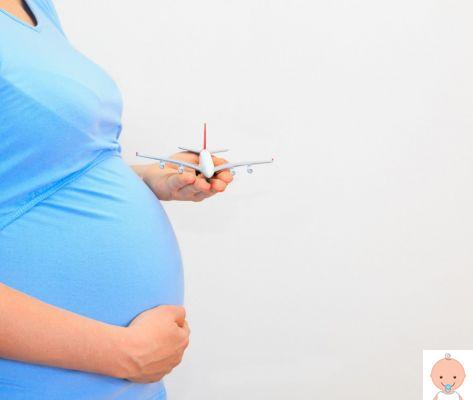 TAKING THE PLANE PREGNANT - Can a pregnant woman take theplane? During the holidays the plane could be a good alternative to avoid long queues in the car, but only if there are no risks for the fetus.
There is no research that justifies a real danger in taking thepregnant plane. It is always a choice that the woman must make after consulting her doctor, especially considering some important aspects such as circulation problems, pressure, possible gestational diabetes. or any previous abortion threats.

Read also: Hot during pregnancy: the remedies to cope with it, video

Take the plane in the first trimester of pregnancy

During the first trimester of pregnancy every trip by plane, but also by car, can accentuate the most common ailments given by nausea and give dizziness. The planes are pressurized, reducing possible inconvenience, although small aircraft may cause more discomfort.

Take the plane in the second trimester of pregnancy

During the second trimester of pregnancy, therefore from the 14th to the 27th week of gestation, the risks of traveling by plane are reduced and flying has fewer contraindications, provided that no relevant clinical elements have emerged and always with the approval of the gynecologist or the attending physician. .

Take the plane in the third trimester of pregnancy

During the third trimester of pregnancy there are greater risks for pregnancy, so much so that some companies advise against taking the plane after the eighth month. The major concern is that placental abruption may occur, or a sudden pressure surge. The sitting position, often immobile if the plane goes through turbulence, could cause disruption to the circulation of the lower limbs.

In some cases, the certificate showing the certificate may be requested at check-in date of termination of pregnancy. The advice is to contact the airline before purchasing the ticket and inquire about travel directions for pregnant women.

Read also: Summer holidays: where to go with the baby bump


Flying in pregnancy, the advice

A few small tricks can avoid the major inconveniences of air travel during pregnancy:

We are like this: the female genital system ❯

add a comment of Can I fly when pregnant?