Can you drink decaffeinated coffee when you are pregnant? 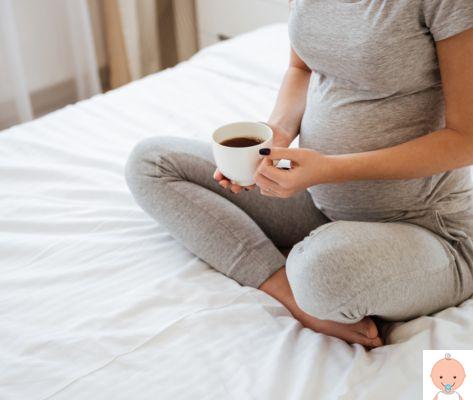 We el paeseni are true lovers of coffee which remains the most popular drink in our country. Difficult to give it up, therefore, especially upon waking up or in the early afternoon: but what should we do if we are pregnant? How much coffee can you drink and what do we know about taking the decaffeinated coffee in pregnancy?

Coffee in pregnancy Ministry of Health

The Ministry of Health reminds that coffee contains substances called "nervine"and therefore it should be taken in moderation because the caffeine crosses the placenta. In addition, pregnant women must pay particular attention because the metabolism of caffeine slows down up to 15 times during pregnancy.

Therefore, caffeine is broken down more slowly during pregnancy and can cross the placenta, entering the bloodstream of the growing baby, where it cannot be broken down. Pregnant women should reduce or eliminate caffeine, alternatively they can opt for the decaffeinated coffee which satisfies the craving for coffee but without bringing caffeine to the body.

The risks of caffeine in pregnancy

Although the exact mechanisms are not yet known, some studies have associated high caffeine intake during pregnancy with:

Generally two cups of coffee a day do not compromise the health of mother and child.

According to experts, the maximum recommended dose of caffeine in pregnancy is 200-300 mg per day.

Read also: What not to eat when pregnant

How Much Decaffeinated Coffee Can You Drink During Pregnancy?

There are no official guidelines on decaf coffee and pregnancy. However, due to the very low amounts of caffeine in decaf coffee, it is very likely that drinking it in moderation is not risky. At the same time, if you prefer not to take caffeine in any way, it is better to avoid decaffeinated coffee and opt for an herbal tea.

How much caffeine is in decaffeinated coffee?

Decaffeinated coffee is defined as coffee from which at least the 97% of the caffeine from the beans during processing. So even if a large part of the caffeine is removed, a minimal percentage remains.

You can drink the caffè while breastfeeding? Caffeine is passed to the baby through breast milk in a percentage of about 1,1% and is assimilated between one and three hours. So, even though caffeine can cause insomnia and irritability in the newborn, a cup of coffee after lunch or away from the feed shouldn't be a problem.

Even less decaffeinated coffee which contains a much lower amount of caffeine than classic coffee.

Il barley coffee it is undoubtedly a very valid alternative to coffee: it has natural anti-inflammatory properties and promotes digestive functions, so it can be drunk with peace of mind even during pregnancy.

Il ginseng coffee it is increasingly popular and appreciated: ginseng has energizing properties and contains a certain amount of caffeine, but certainly lower than coffee. However, often the soluble ginseng that we find at the bar contains an excessive amount of other ingredients, especially sugar. So if you are a ginseng coffee lover, it is best to buy a package of real organic ginseng extract at the supermarket or shop and prepare your coffee with the mocha at home. And in pregnancy? It always remains an energizing drink that contains caffeine so better avoid it.

Can I fly when pregnant? ❯

add a comment of Can you drink decaffeinated coffee when you are pregnant?