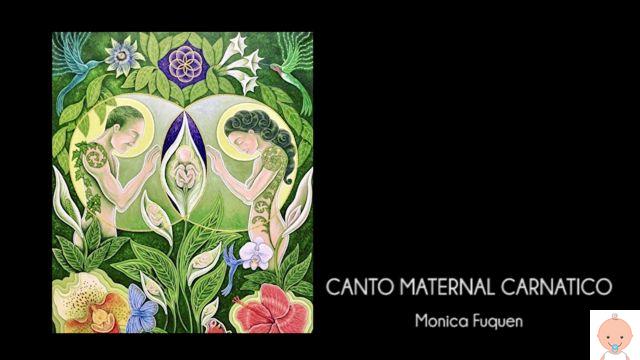 Tired of the usual childbirth preparation course that includes only autogenous breathing training? Too lazy to do yoga or swimming? Do you want to give vent to your sensations in the spontaneous way represented by the emission of the voice and sounds? Try the carnatic song!

Il carnatic song or vowel song, was born in southern India and Sri lanka around 2000 BC, as an introduction to meditation; only in the 70s was it brought to Europe by a French gynecologist, Frédérick Leboyer, already famous for assiduously supporting "sweet birth", who adapted it and proposed it to pregnant women as a self-support technique useful during labor and childbirth , to make you become aware of yourself through the voice and to take advantage of the relaxation of the throat and pharynx area to also promote the relaxation of the uterus and vagina, which are closely connected, and thus make them able to dominate the pains of labor and childbirth

Carnatic song what it is

Carnatic chant is the emission of vowels and sounds modulated on the breath; relies on abdominal breathing, so lower your diaphragm and push your abdomen out when you inhale and make sounds and vowels when you exhale.


Each woman is free to choose which is the most suitable vocalization at that moment and does not have to follow pre-established melodies, moreover emit sounds and vowels and use the voice to vent fear and tension during contractions helps to release tension and relax and allows to enter contact with the child who is rocked by the vibrations

How to do carnatic chant

First of all we start from silence. The atmosphere must be calm, serene and silence must dominate. It begins with gentle twisting and stretching exercises of the spine and pelvis, then continues with breathing exercises and finally begins with the actual singing. During this carnatic singing exercise, the same sounds emitted with different vowels are performed and followed one after the other, starting from silence and ending with silence, starting with the open "a" that allows the mother to release tension and unblock herself, and which lasts all the time. of the exhalation and continuing with "eee", "iii", "ooo", "uuu"; depending on the vowel the mouth changes and allows you to regulate the air outlet, producing different beneficial effects on the body and mind of the pregnant woman who implements this technique

What is Carnatic Chant for during labor

Carnatic singing during pregnancy helps, thanks to deep breathing and the correct posture acquired, to relieve back pain, which is frequent especially with the approach of childbirth due to the weight of the belly; during labor, emitting sounds and vocals will help to loosen the muscles and the muscle tension itself, to maintain the forces to push during the expulsive phase, to accept and control the pain of contractions, relieving tension

Read also: How to feel less pain during labor

Useful in any moment of life, carnatic chant gives serenity and removes tensions, helps the individual to relax entering in peace and in harmony with himself; in the pregnant woman the carnatic song transmits the possibility and awareness of experiencing pregnancy and labor actively, as a protagonist; the pregnant woman becomes capable of controlling events, not by passively accepting them but by commanding them herself

As with any other relaxation technique, only if it is performed with constancy and awareness and if it is learned in the right way, will it show its fruits at the right time. The woman who attended a carnatic singing course during pregnancy, who developed her own autonomy in singing and vocalization and who learned the correct technique of exhalation and inhalation with the right posture and who practiced every day, at the the moment of labor will be able to manage and implement what he has learned, letting the pain go through and releasing tensions, saving energy for the expulsive moment

The courses can only be of carnatic singing or be associated with yoga and childbirth preparation courses, in general they last about 2 months and in total there are ten meetings. During these meetings the presence of the partner is not foreseen as the carnatic song prepares the woman to experience labor, an event in which she will be the protagonist and where she will have to play an active and decisive role.