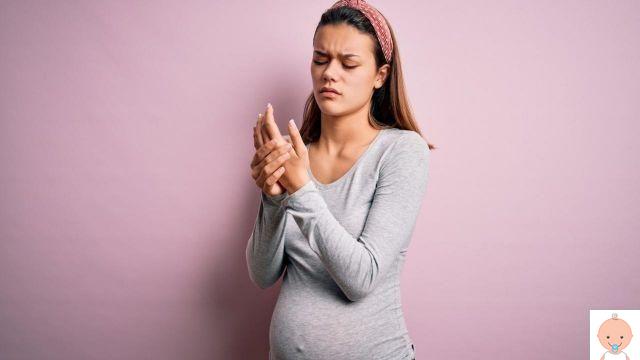 A rather common ailment in

it is carpal tunnel syndrome, during which the tendon that runs from the wrist to the hand narrows, causing pain and swelling in the hand. The carpal tunnel is the channel between bones, tendons and ligaments, located in the wrist region, through which tendons and nerves pass from the forearm to the palm and fingers of the hand. Symptoms of this

depend on the degree of compression of the

, but they can understand


and a decrease in hand strength. In general, the pains that this ailment produces are more intense during the night.

Carpal tunnel syndrome occurs in pregnancy due to water retention and swelling due to tendon narrowing, or increased joint mobility. This disorder is very annoying for the mother but it is absolutely not dangerous for the baby.

What causes this painful syndrome that affects the hand, also significantly limiting its functionality? Everything originates from the median nerve, which starts from the armpit and reaches the first three fingers of the hand crossing, at the wrist, just a small tunnel called the carpal. Pain syndrome occurs when this median nerve is compressed by hand tendons that can thicken. This type of problem, which usually affects women between 40 and 60 years, and especially during the

, however, it can more easily occur during the sweet expectation. The reason is to be traced back to

that by causing water retention that mainly affects the peripheral areas of the body (hands and feet), it can cause the appearance of edema which compresses our median nerve.

Pregnancy, what is hyperemesis gravidarum

This pathology is characterized by

of the first 3 fingers (thumb, index, middle finger) of the hand and loss or decrease of the hand strength which results, therefore, awkward in the movements. These disorders occur mainly during the night and are such that they do not allow those affected to sleep (the subject must get up and shake the whole arm to awaken the hand and arm). This symptomatology, in the most serious cases, can be accompanied by tendinitis, bursitis, epicondylitis involving the upper limb.

The early diagnosis of the disease through the use of

, which provides an irreplaceable tool to implement a correct prevention of the disease. The patient will have to undergo some neurophysiological tests such as electroneurography (ENG), which allows to determine the delay in the conduction of sensitivity and motility of the median nerve at the carpal canal level, and

(EMG), i.e. a study of the conduction velocity of the median nerve.

The cure for carpal tunnel syndrome depends on the severity, but surgery is usually not needed

for a long time, keep the hand raised at night, use ice and specific medications to reduce the

usually within 3 months after delivery, but if left untreated, nerve function can be permanently impaired.

If symptoms are severe (sensory - motor deficits) or persist after trying nonsurgical therapy, surgery may be the best option.

add a comment of Carpal tunnel syndrome in pregnancy