Cheeses in pregnancy: which to eat and which to avoid 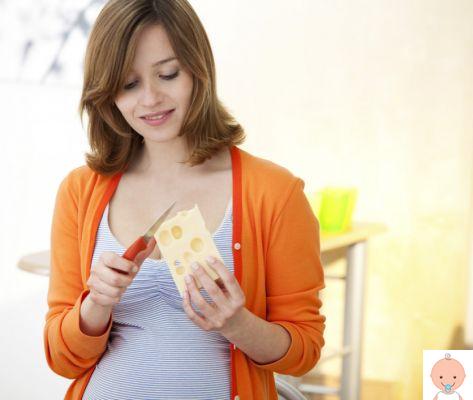 When we find out of to be expecting a baby, many habits must be changed in favor of a healthier and more functional lifestyle for the child's development. The doctor himself will provide us with a series of rather precise indications on what to eat and not during pregnancy and the ideas are quite clear also thanks to the amount of information that we will find on the Net. We know well that some foods - such as undercooked meat, cured meats, seafood, raw vegetables - should be avoided, but what about the cheeses in pregnancy? Which ones can we eat which ones should we limit?

Are cheeses in pregnancy good for you?

One of the most common food "cravings" among pregnant women concerns the cheese: it is a clear signal that the body needs proteins, calcium, vitamins and all the nutrients contained in the cheese which also serve to nourish the baby in the belly. The cheeses, as well as the milk and derivatives, are, therefore, very important foods in pregnancy because they provide concentrated quantities of calcium, phosphorus and magnesium, essential for the mother's and baby's bones. They also bring vitamin B12 and proteins. However not all cheeses are suitable, some should be avoided.

Which ones to eat?

Basically they are perfect:

Which cheeses are bad during pregnancy?

I cheeses to avoid during pregnancy, so I am:

I unpasteurized dairy products may contain pathogens, such as E. Coli or la Listeria: a bacterium that can cause an infection called listeriosis, potentially responsible for miscarriage, neonatal mortality and complications, meningitis, premature birth, septicemia and problems in the newborn. Often listeriosis in the mother is asymptomatic, but it can be transmitted to the fetus through the placenta. In other cases the listeriosis can manifest itself in the third trimester of pregnancy with symptoms as:

Pregnant women have one 10 times more likely to develop listeriosis compared to the rest of the population. To reduce this risk, it is sufficient to avoid raw milk and unpasteurized dairy products: the pasteurization it is a process that brings food up to a certain temperature in order to eliminate harmful bacteria.

List of cheeses that can be eaten during pregnancy

Here is a final list of cheeses that are allowed to be consumed during pregnancy, without major risks:

Photos of children on social media: how to behave ❯

add a comment of Cheeses in pregnancy: which to eat and which to avoid