Chickenpox in pregnancy, risks and prevention 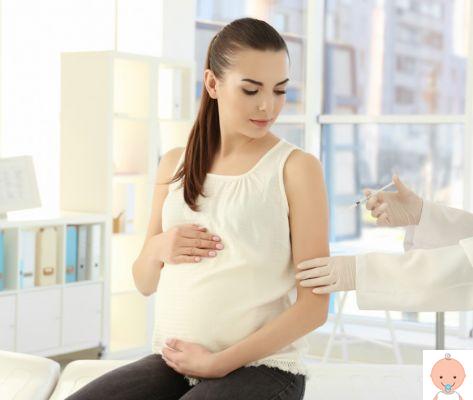 Transmission of the chickenpox virus occurs by air through airborne respiratory droplets when an affected person coughs or sneezes, or through direct contact with a chickenpox or shingles injury.


Varicella zoster infection during pregnancy is quite an event rare because most adults are HIV-positive for the virus. The incidence of infection during gestation is estimated to be 0.7 cases per 1000 pregnancies. Vertical transmission (therefore from mother to child) can occur in utero or during childbirth via the ascending route.

If you get chickenpox during pregnancy they can present themselves complications and risks for both the woman and the child.

For the child the possible risks depend on the gestational age:

Chickenpox in the 7th month of pregnancy, what to do

Chickenpox is very dangerous if contracted in the last weeks of pregnancy, especially in the last month: an infection occurs in about 50% of newborns and will be clinically evident. In particular, according to latest guidelines, it seems that:

How is chickenpox in pregnancy treated?

Official guidelines tell us that:

Il delivery it will have to be avoided at least in the 7 days following the onset of the rash maternal to allow the maternal organism to produce protective antibodies to pass on to the baby.

Prevention of chickenpox in pregnancy

Prevent chickenpox it means, first of all, to be vaccinated or to have already had the disease in the course of life. Otherwise, any contact with sick people must be avoided. In the literature, a transmission risk is considered domestic or intimate contact of more than 5 minutes with a patient suffering from chickenpox.

In case of exposure and risk of contagion, the gynecologist should be notified immediately who could prescribe a preventive therapy based on specific immunoglobulins (which must be administered within 96 hours of exposure) or the vaccine.

Vaccine for chickenpox in pregnancy

Since chickenpox during pregnancy is a major problem for possible serious complications, the new vaccination schedule has made it mandatory and offered free of charge from the Ssn la chickenpox vaccination. According to official indications, the varicella vaccination must be offered to women of childbearing age who are seronegative. It is therefore essential to promote widespread information among gynecologists who, in turn, will be able to correctly inform women about the possible risks of chickenpox in pregnancy and make them aware of the importance of the vaccine.

The varicella vaccine contains a attenuated virus, therefore it should not be administered during pregnancy (even if no damage to the fetus has been documented following its administration), but to women of childbearing age who have not had chickenpox in the past and therefore, not being immune, would risk getting sick just during a future pregnancy.

Varices and varicose veins in pregnancy. What to do? ❯

add a comment of Chickenpox in pregnancy, risks and prevention