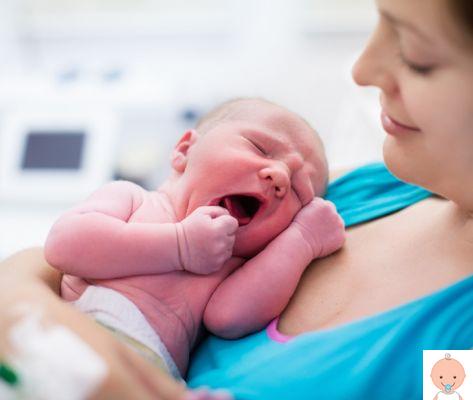 I give birth with fast labor

Another space dedicated to your childbirth stories. Today Machi tells us how her little Chiara was born: with a quick labor, but with an unexpected surprise that worried her very much.

A few days before the birth, the totonascita: my brother-in-law said that I would have given birth on March 18th, my confirmation godmother (who doesn't miss one) was inclined towards 12th, while I was oriented towards 14. There was no effective date of the term of pregnancy because I had the last cycle on May 18, but from all ultrasounds Chiara it turned out to be 3 weeks shorter than the period of amenorrhea, so we had as an indicative date 15.


On the 12th, knowing the infallibility of my godmother, I was on alert all day, but nothing happened. Even after the 13th, I began to think that maybe my brother-in-law was right.

Il 14 March I woke up at 5,00 in the morning I felt a slight pain in my lower abdomen, I waited a bit but it didn't go away: the first thing I thought was "and now how can I wake Martina?"

I decided to wait a little longer, but the pain started to increase and it was unmistakable, so I woke Andrea up and said: listen, but what if instead of 18, 14 is born?

He then and there did not understand what I meant and I: tense the pains began!

He literally jumped out of bed, got dressed and immediately went to prepare Martina who got dressed without making a whim.

We arrived at the hospital around 7,00 and the gynecologist who examined me said that I was not dilated at all and that I would probably have given birth the next day or the next.

Total panic, it took me to give birth to Martina 20 hours and everyone had told me that for the second it takes less time, so why did the doctor tell me about 1 or 2 days?

Since I was at term of pregnancy they hospitalized me and placed me in my little room. The pains were there, and how, but since my daughter was there I tried not to show it too much. After a while my brother came and took Martina to his house and so it was just me and my husband.

Read also: Childbirth story with a cord around the neck

The pains continued to increase and I tried to stay calm and breathe, but every time I thought "do I have to stay like this for 2 days?".

About 16,00 the pains became almost unbearable and I asked Andrea to call someone. The trainee, who was also present at the visit, looked at me and saw that I was dilated by 2 cm, so she told me to go to the medical room to have an enema and have my hair removed.

While the nurse was shaving me I asked if the was needed enema since I had already passed out and she replied that it was the practice.

While she was shaving me, I got a contraction and she said to me: what are you doing pushing?

So he called the doctor who came to see me: 5 cm of expansion. They took me to the labor room and asked my husband to wait a moment outside because there was a girl inside who had had a caesarean and was recovering.

I am left with a 'midwife very nice and helpful who answered all my questions including: how long will it take?

In less than half an hour I was ready to give birth to Chiara, the contraction came and I pushed, then another one and I pushed again: the head came out but something was wrong. Chiara had 2 turns of umbilical cord around her neck. My heart stopped, at that moment I no longer felt the pain. They told me to don't push anymore: they gently pulled out the head, cut the cord and I started pushing again: my little girl came out after a couple of pushes.

I asked if he was okay and they immediately reassured me. While the midwife was sewing me up, the pediatrician and the nurse took care of my puppy and as soon as all the neonatal exams were finished, the nurse brought her and put her next to me. The emotion for the birth of a child is always indescribable, I looked at her and the first thing I said was: oh my God she's a little Andreina, she looks like her dad!

Do you want to know what was the funniest thing? Nobody came out to say that Chiara was born and my husband found out ... from the cleaning lady!

The fear was so great, Chiara also drank some of the dirty water, but luckily we can tell it: our little girl gladdens us the days and like her sister she fills our hearts with love!

You tell childbirth: "I would not have wanted it to go like this" ❯