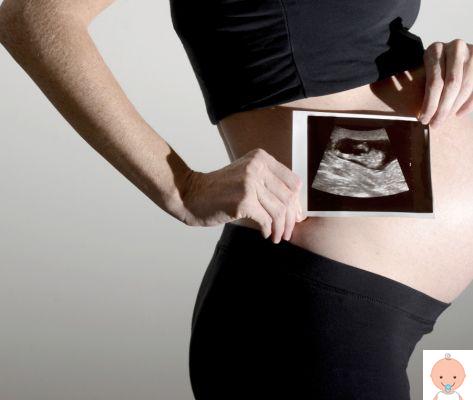 Through palpation of the maternal abdomen or with the aid of ultrasound scans during pregnancy, it is possible to establish the position of the fetus at the time of delivery.


Inside the uterus, the fetus is gathered on itself to better adapt to the walls of the uterine cavity. In obstetrics the term "presentation"it is used to identify the part of the fetus facing the birth canal at the time of birth.

La cephalic presentation, ie the one in which the baby's head is facing downwards, occurs in 90% of cases and is in fact the most physiological fetal position. When the fetus presents head-down and assumes the curled-up (occiput-anterior) form, the contractions of the uterus allow the cervix to open and the baby is pushed along the birth canal. The left anterior occiput position, that is, the one in which the child has the head down with the nape facing the maternal abdomen, is the most frequent.

The head is the most voluminous part of the entire body of the fetus and is also the least compressible. Its passage through the birth canal is favored by the particular conformation of the cranial bones which are not yet completely ossified and by the contact lines of the bone scales, called sutures, which overlap facilitating this passage. The baby can assume other positions which, at times, can interfere with the natural development of the birth. For example, the location posterior occiput, with the baby upside down with the nape facing the mother's spine, can cause back pain during labor because the fetus's skull presses on the sacrum or other nearby parts.

The breech position of the fetus

The child can also have a position podium: in this case the fetus turns the lower part of the body to the birth canal instead of the head. Among the anomalous presentations, breech is the most frequent and can make delivery difficult. The breech presentation has several variations:

If at the time of delivery the fetus is in full breech position there is a possibility that he will flex during delivery while incomplete presentation, for example presentation of a foot or buttocks, makes flexion much more problematic. As already mentioned, it is possible to diagnose breech presentation at the beginning of labor through a simple visit; if there are any doubts, an ultrasound examination is used to know the fetal presentation.

Read also: The baby is breech, what to do?

It must be said that in the third trimester ultrasound, the one performed at 30-34 weeks of pregnancy, about 16% of fetuses are breech but generally before delivery most of them turn spontaneously assuming the cephalic position. At the end of pregnancy, only 4% of babies remain in the breech position. The breech presentation can be modified with some turning maneuvers and does not preclude the possibility of performing vaginal delivery but involves greater risks for the fetus.
Generally, natural childbirth is opted for when the following conditions are present:

In the absence of these conditions there is a tendency to perform a caesarean section because proceeding with the natural birth would involve considerable risks. In fact, even if in very rare cases, it can happen that the baby's bottom and legs, smaller and more compressible, easily pass through the birth canal without having made room for the head which can therefore become trapped. If this occurs, the fetus can suffer damage resulting from the lack of oxygen due to the prolonged expulsive period or from the tractions to which it is subjected to allow it to pass through the birth canal. However, the caesarean section should not be performed before the 40th week of pregnancy because there is always the possibility that the baby will turn around spontaneously.

Childbirth and panic attacks: what to do ❯