Children and TV: the rules for a "healthy" use of cartoons 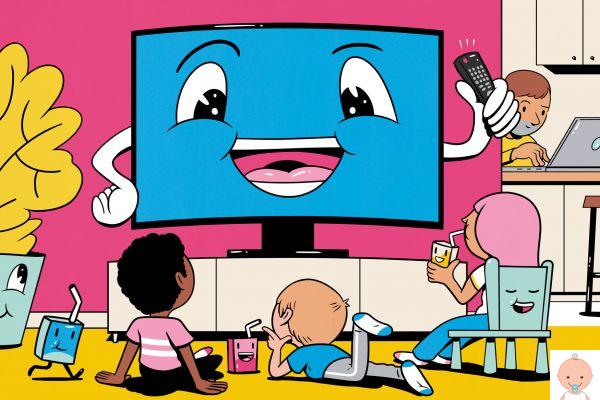 Cartoons yes, cartoons No.. a dilemma for many Parents. But as in many of the decisions concerning theeducation of the children and especially in the first year of age, you can not speak of diktat, but you have to follow some guidelines very general and use the common sense. As to behave so in case of children e tv?

If it is true that a child under the 12 months it shouldn't be put front to a video, To television or yet Cartoon on tablets, it is equally true that if this neonate has a brother more great it's not always easy avoid it.

So here's how proceed so as not to incur a use incorrect area of tv and cartons animated, which instead, in some phases of growth and with due doses, they can be valid allies, both for the development of child that for the peacefulness of the moms and Pope.

The first advice, perhaps the most important from which to do to descend all the others behavior da use on the topic children e tv, is to not allow to the television to become a substitute of the people - parents, grandparents, babysitters, uncles - with whom he should interact the child. In first year of age i small they need to relate with others people, of play with others, of experience really the world, of to live nello space and do le what's this first hand. There television does not give this opportunity nor i cartoons more innovative respond to need of a reality three-dimensional.

Therefore starting from this subject matter and by the fact that a bimbo between 12 and 24 months it shouldn't be more than 15 20-minute al day in front of the screen, not all cartoons are deleterious, indeed, some help also to learn a to recognize i colors, forms e solve of the problems apparently simple ma complex to children of thatage.


Programs like Baby Einstein, for example, or art Attack, which use the music classic, or ask for one participation active, stimulate il child and they fit small doses and help, thanks to contrasts net of colore, To simplicity of message, To repetitiveness of some schemes.

Using these little ones precautions use moderate area of television and cartoons can to help also Parents to have the time, for example, of to cook or to get dressed with calm. Another element important, when it is possible, is see i cartoons with their own children, In order to to comment what happens and then be able to to examine with the child, stimulating her capacity di story and password.

Kids e tv in short, it is not a combination impossible, if you respect some rules. The television it's not a "parcheggio" or one tata, but it must become occasione di growth. See i children I am more older children, do not make them become owners of remote control, but targeted always there choice about what watch. The time it is well important: you should never exaggerate, but limit yourself a 1-2 hours at most.

E remember another thing: the tv prima di sleep it can be a dangerous one exciting and make any worse problems ad falling asleep. Forbidden turn it on even during i Easter (yes, we know: just to do eat Most capricious you would do anything, television including, but it is one behavior da unhinge) and while doing i tasks to casa.

Audio Video Children and TV: the rules for a "healthy" use of cartoons
Children 'born with a shirt' ❯

add a comment of Children and TV: the rules for a "healthy" use of cartoons