Chocolate during pregnancy: can it be eaten? 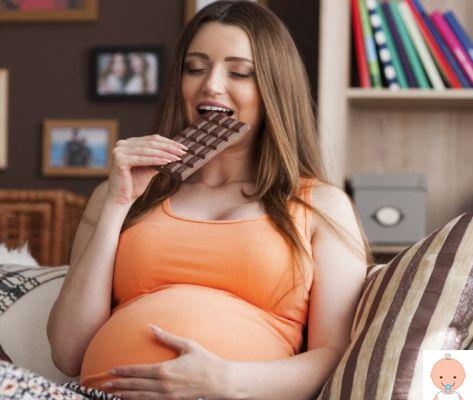 During pregnancy the cravings increase, from the strangest ones (I would like strawberries and it snows outside) to the more normal ones (I would like some chocolate) But the expectant mother is always careful about what she can and cannot eat during the 9 months. Sushi? No thanks! The salami sandwich? It will be the first request after the birth! However, chocolate, unless advised against by your doctor, it's good for both mom and baby and, taken in small doses, it has no contraindications for pregnant women. Chocolate can thus be safely consumed in pregnancy, in a quantity of approx 30 gr per day, indeed it improves mood and blood pressure. Let's find out in detail what are the benefits of chocolate in pregnancy.

Read also: Coffee and caffeine in pregnancy: no to excesses

Dark chocolate improves mood. According to research published in Proteome Research, eating 10 grams of chocolate a day for two weeks lowers the levels of the hormone cortisol, or that of stress. Indeed, chocolate increases the levels of endorphin and seratonin in the brain. In the study, Sunil Kochhar and colleagues identified reductions in stress hormones and other stress-related biochemical changes in volunteers who considered themselves highly stressed and ate dark chocolate for two weeks. "The study provides strong evidence that a daily consumption of 40 grams over a 2-week period is enough to change the metabolism of healthy human volunteers," the scientists say. The study appeared in the Journal of Proteome Research and was conducted by researchers from the Nestlé Research Center in Lausanne, Switzerland.

According to one studio canadian chocolate would be able to reduce the risk of preeclampsia (ie high blood pressure in pregnancy) in the future mother and to favor the growth and development of the fetus. Researchers from the Université Laval Québec City in Canada, coordinated by Emmanuel Bujold, involved 129 women at risk of high blood pressure asking them to consume 30 g per day of chocolate of various types and qualities. The index that measures uterine artery pressure showed that blood circulation of the placenta, uterus and fetus was significantly better in women who consumed chocolate. After 12 weeks of study they saw the results and the authors understood how this food can promote the development and a good birth weight of the baby. "This study indicates that chocolate could have a positive impact on the placenta, fetal growth and development of the baby. It also shows that the effects of chocolate are not only and directly due to its flavonoid content," says Emmanuel Bujold.

Also in this case it is always science that comes to our aid. In Portugal, a team of researchers from the Polytechnic Institute of Coimbra studied the situation and found that to consume a few squares of dark chocolate a day helps lower blood pressure. By measuring the cardiovascular function of a sample made up of 30 healthy young people, the researchers evaluated the benefits deriving from the intake of the cocoa dessert. Another 2022 study, conducted by colleagues from the University of Perugia, states that moderate consumption of dark chocolate (30g per day) during pregnancy can have beneficial effects on blood pressure, without compromising weight control or blood cholesterol values. . However, remember that the chocolate allowed during pregnancy is that dark 70%, while snacks, chocolates, chocolate cake and other industrial products with chocolate are not allowed.

Audio Video Chocolate during pregnancy: can it be eaten?
Pacifier to babies, give it or not? Here are advantages and disadvantages ❯

add a comment of Chocolate during pregnancy: can it be eaten?