Class WhatsApp group: the most typical cases and concerns of mothers 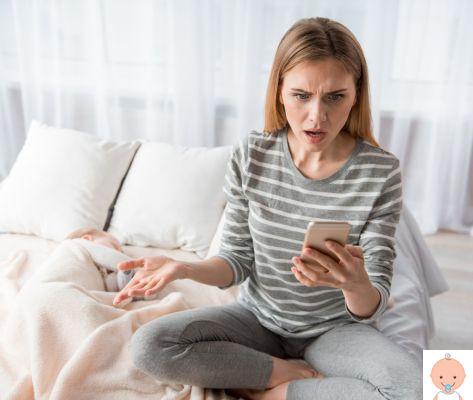 The worst of moms on classy WhatsApp groups

Far be it from us to demonize the classy WhatsApp group, which is often a real life saver. It reminds us of commitments and deadlines, ensures that many cute initiatives are organized quickly and easily, and allows us to compare ourselves with other mothers of children of the same age as ours, which never hurts!


However, there is also a downside. Excessive or completely unfounded worries can be fed to excess. Simple situations and solvable problems become state cases. And let's face it, being able to communicate in seconds with all the other moms in the class brings out the worst in some types of people.

How do moms behave on the WhatsApp group when ailments start running around in their children's classrooms? Mammansia tells us about it

So let's see some of the most typical cases that occur in class WhatsApp groups, and in which you have probably happened to run into!


The most typical case that is raised in class chats is the organization of a pizza between mothers otherwise called #girlsnightout. Hashtag that makes you think more of a cool disco in the Maritime city and sunrises on the beach rather than the shabby pizzeria that, for some reason, makes everyone agree. Pizza between mothers is an affair punctually taken in hand by the same person who feels a little like the event planner of the situation. Finding a date and place that everyone can agree on usually takes an average of two to three weeks, and it's not uncommon to look at your phone after an hour-long meeting and find 87 WhatsApp messages in it. You think your house blew up from a gas leak, then you open it and you realize it's there class chat moms discussing the date and place of the #girlsnightout. Without landing anything.

In every self-respecting class chat there is always a mother who posts almost exclusively photos, accompanied by a short, generally alarmist caption. Sometimes his initiatives are also commendable, like when he photographs the school bulletin board that no one ever has time to read. But often his messages are absolutely cryptic. For example, she is able to post a photo of the tiles in a school bathroom with the caption "I have no words" and a shocked face. You concentrate on the photo, thinking you will find the face of the Divine or something like that, until you understand that the tourist is angry with the grouting of the tiles, in her opinion as "filthy".

Another fixed column of the class WhatsApp group, especially in this period, concerns the announcements of epidemics: measles, chicken pox and other exanthematous diseases, flu, bronchitis and so on. The battle cry is "Chickenpox is around", the problem is that the source is not always reliable. "There is chickenpox around" could in fact mean that half of the school contracted it as well as that the cousin who is fifty kilometers away was affected. With the announcement, therefore, the mother of the infected intends to decline all responsibility.

One of the most embarrassing and unpleasant, but sadly frequent, instances of class chat is when someone raises a problem to the group about a child - whose mother is clearly not included in the group. The reasons why such a child is singled out as responsible for all the evils of the world, or at least of the class, can be different. Maybe he's a foreigner. Or he lives in a foster home. Or again he is the son of a single mother with a dark past. As a result, the child has a difficult character, perhaps he is quarrelsome, or he does not know the language and therefore "makes the whole class lag behind". The point is not the validity or otherwise of such accusations, but that the target is the child himself, who most likely pays only the consequences of a situation that in no way helped to create.

The question of the canteen is one of the most debated among mothers in class chats, and the agenda is almost always the same: "My child won't eat me". But not only. Endless discussions about the snack can arise. A message such as: "It is not fair that the teachers impose to bring fruit: I give him / her the snack, otherwise he will not eat me anything" can give rise to a fire fight between the pro-fruit and pro-snacks. Whether children are not eating healthy, not eating enough, or both is always a hot topic in these chats!

There are some classy WhatsApp groups where relationships are kept friendly and nothing more. We just talk about the most important operational issues and, if some mothers in the class are actually friends, they interact with each other elsewhere. But even in these more strictly "operative" groups she is often there: the mother alone. The one who sends 8 voice messages to ask for advice on which sport to have her child do, making the history of her previous activities starting from neonatal aquaticity at 3 months. Here, one of the most painful cases of class WhatsApp chat is looking at the mobile phone, discovering the 8 voice messages that date back to hours ago and finding that NONE of the other mothers have replied. The next message will arrive two days later, when under the last voice post of the ignorant parent someone will write: “Hello girls! So how do you organize your Christmas gift to the teachers? "

"The unvaccinated child got measles." "The homework is on page 42, not 43" "The janitor X is retiring, present?!?". The News Mom is the official spokesperson for all school-related matters. It is not known how, but she always knows everything: she is suspected of having a contact on the answering machine. It must be admitted that having a news mother in the chat is very convenient, were it not that from her news in real time often mediating cases and real crusades arise. “The teacher screamed today. My daughter is very upset. Your?" And while 20 indignant mothers put their hands to the pitchforks, you can't help but remember the donkey hat of the past, when the teachers not only screamed but left objects, and if once you returned home you told your parents about it, you even caught one slap.

In this video MammAnsia reveals the behind the scenes of class and private chats, parallel to the mothers.

add a comment of Class WhatsApp group: the most typical cases and concerns of mothers