Co-sleeping, pros and cons of keeping babies in bed 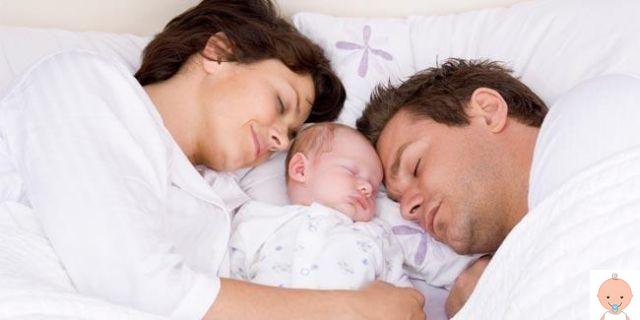 Most of you will have said it at least once in pregnancy, we are sure: “The newborn in the Latvian? But he doesn't really talk! We would end up crushing it! And then what happens to our intimacy? There is no question at all. Everyone in his bed… ". But then the baby is born and, put the desire to cuddle him day and night and to smell that intoxicating scent, put the devastating fatigue after a day of feedings and diapers that would make you sleep even standing up, and here is that the puppy of the house ends up beautifully sprawled in the Latvian in the middle of mom and dad. In some cases, however, co-sleeping is a conscious choice of parents and it is a trend that is increasing. With its pros and cons of him. What now we see.

How widespread is co-sleeping

According to a recent research, one in 2 couples in the country declares that they practice co-sleeping, the habit of sharing their bed with their children. In one case out of 5 this lasts beyond the child's 5 years, with exceptions that even reach the age of 13. Apparently, it is the boys who try more to sleep with their parents, while the girls are more independent (obviously we are talking about children older children).

Until recently, co-sleeping was unthinkable because it was not part of our mentality. And there are still many couples who think that children should be made autonomous soon. As mentioned, sometimes co-sleeping is practiced consciously by parents: many feel safer to have the baby always with them.

Co-sleeping has a huge advantage for breastfeeding mothers: just uncover the breasts at any time, let the baby suck and go back to sleep peacefully. With an infant, fatigue is felt and getting up often at night does not allow you to recover the energy necessary to face the next day (we also think of those who return to work after a few months from giving birth).

However, co-sleeping is not only a comfortable choice for parents, but some scientific evidence points out that there are important implications on the development of newborns. In fact, it is not at all true that the little ones who sleep in the bed will be insecure when they grow up or that they will have difficulty reaching their independence. This is stated, for example, by a research conducted by Stony Brook University in New York which monitored almost a thousand couples who practiced co-sleeping. Once they grew up, these children had no particular "discomfort in any aspect of their life".

The advantages are also others. The smell of close parents is a very powerful calming agent for newborns, especially in the first few weeks after birth. Often, in fact, an object or a doll is proposed to them (see HERE) that the mother keeps with her during pregnancy to impregnate it with its own smell and not make the baby feel alone in her cradle. But if she sleeps with you, the problem is solved. When they are very small, newborns need contact with the mother (the so-called bonding), it is not a whim and not even a vice, as you may have heard you say. It is truly a necessity.

Instead, let's see the disadvantages of co-sleeping. The first is related to the so-called "cot death". In fact, it seems that sleeping with parents can be one of the contributing causes of SIDS (we talked about it HERE). It is therefore important that even in Latvian babies sleep on their stomach (protective factor), especially after feeding. In addition, an additional risk is constituted by parents who smoke or are obese, the presence of many pillows and heavy blankets in the bed or a not particularly firm mattress. Pay attention to all of these aspects if you are planning to sleep with your child or if you already do.

If, on the other hand, you think about the fear of crushing the baby in sleep, know that this is very difficult to happen: immediately after birth, sleep becomes physiologically lighter and you are able to immediately perceive any particular noise or movement. On the other hand, this could mean that, with the anxiety of the child in the bed, your sleep may not be restful, but this is a completely subjective fact.

Co-sleeping and intimacy with partner

And then there is the question of intimacy with the partner. The choice of co-sleeping must necessarily be shared, not imposed by one of the two. And it must be done with conscience. It is inevitable that a child in the middle of the couple can somehow reduce the opportunities to be together for a while, to exchange affection, of course, but also just to talk a little after a day in which we have seen little. However, a relative problem which can be solved by looking for alternative solutions.

The cots for co-sleeping

Today, however, there is an interesting middle ground between the baby in the Latvian and the cradle alone. These are the beds that have three sides instead of four and that can be attached to your bed. They are comfortable because they allow you to be very close to the baby and to be able to breastfeed easily or to comfort him in case of crying. All this guarantees greater intimacy with the partner, more safety with regard to SIDS, but at the same time it is an idea that does not make the child lack the contact and attention he needs. Take a look HERE.

Another alternative for not having it right in the center of the bed, but laterally, is made up of the sides that fit under the mattress (you can find an example HERE). They are also very practical when traveling because when they are closed they do not take up much space in the trunk of the car. Also, they can be used later when babies sleep in their own bed to prevent them from falling out.

Audio Video Co-sleeping, pros and cons of keeping babies in bed
Coca Cola in pregnancy: can it be drunk? ❯

add a comment of Co-sleeping, pros and cons of keeping babies in bed