Coca Cola in pregnancy: can it be drunk? 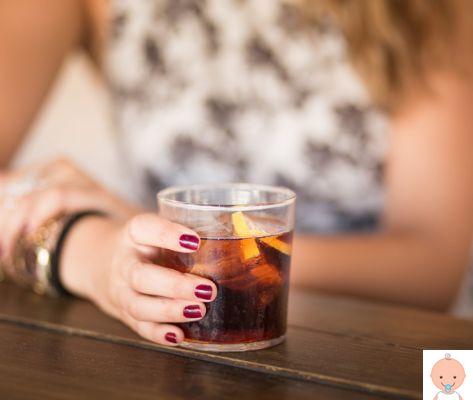 La Coca-Cola it is the most popular carbonated drink in the world and it is difficult to give up a glass of Coke especially on certain occasions, such as a pizza or a sandwich with friends. But you can keep drinking Coca Cola in pregnancy? Is it safe and what are the maximum doses we can consume?

Can i drink Coca Cola if i'm pregnant?

In theory yes, as long as do not overdo it. Coca-Cola contains caffeine and sugars, substances that must be limited during pregnancy. In particular, caffeine should be taken with great moderation and within the limits of 200-300 mg per day. Be careful because the maximum amount of caffeine allowed is reached with two espresso coffees and it is important to note the amount of caffeine consumed during the day, considering that it is also contained in chocolate or green tea.

On the Coca Cola website we read that a can of Coca-Cola Classic contains 32 mg of caffeine and a can of Diet Coke contains 42 mg. Alternatively, if you want to eliminate the consumption of caffeine without giving up a carbonated drink, you can opt for the Sprite or a Fanta

The risks of caffeine

Caffeine takes a little longer to digest and metabolize, and as pregnancy progresses, the breakdown of caffeine also slows, exposing the fetus to the negative effects of this substance.

Numerous studies confirm that taking high amounts of caffeine during pregnancy increases the risk of various problems such as:

The risks of sweeteners

Even in the cans of Coca Cola Zero sugars are still present, for example aspartame, sucralose or saccharin. A sugary drink not only does not take away the feeling of thirst, but promotes a surge in blood sugar which is always better to avoid, especially during pregnancy.

Diet and caffeine-free sodas do contain a number of chemical substances and, in general, it is best to avoid them when possible during pregnancy, especially since scientific research is in progress.

For example, according to the FDA Trusted Source, some fizzy drinks contain polycyclic aromatic hydrocarbons, relatives of benzene, which is carcinogenic.


Other drinks they have phosphoric acid and citric acid, two chemicals known to erode tooth enamel and we know pregnant women are more vulnerable to tooth decay and gingivitis due to hormonal changes.

Ultimately, therefore, Coca Cola in pregnancy is not expressly prohibited, if it should still be limited if not avoided, also because it does not bring any nutritional benefit, in the face of a certain amount of caffeine and sugars.

Coke and nausea in pregnancy

Coca Cola has been considered a natural remedy for nausea during pregnancy for generations. In fact, if you have digestive difficulties, Coke can help thanks to its acid pH. But there is no scientific evidence regarding its beneficial effects on nausea typical of the first trimester: so for some women it can be of real help, while it has no effect on others.

Coca Cola in pregnancy and contractions

A study from a few years ago, published in the American Journal Nutrition, hypothesized that excessive consumption of carbonated drinks could favor premature birth: according to this research, conducted on 60.000 women, the risk of premature birth was 11% higher for women who had drunk more than one sweetened drink per day, and 25% for those who consumed drinks with sweetener (especially aspartame).

This is not a conclusive study and does not add much to what is already known: during pregnancy you should follow a diet that is as healthy and balanced as possible, preferring foods that have a nutritional value adequate and avoiding those that bring only sugar or calories.

Audio Video Coca Cola in pregnancy: can it be drunk?
Breakfast during pregnancy: ideas, tips and recipes ❯

add a comment of Coca Cola in pregnancy: can it be drunk?