Conception, the things to know 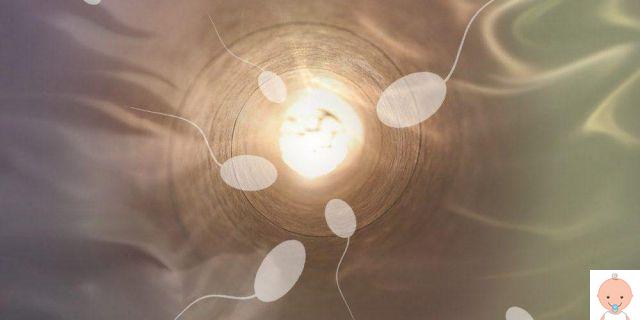 Even before the test positive, the most awaited event for those looking for a pregnancy is conception, the moment in which the magical meeting of the gametes takes place that will give life to our much desired baby. We do not know from the outside what happens in our body, but we certainly hope that the dream will become reality as soon as possible. So let's find out more about what conception is, how and when it occurs.

In extremely simple terms, conception (or fertilization) is the process during which the male gamete (sperm) fertilizes the female one (ovum). Each month, during the ovulatory phase, a follicle releases an oocyte that moves towards the fallopian tubes, the place where conception will take place in the following 24 hours.

With ejaculation, a large amount of sperm enters the vagina, approximately 200-500 million. Think that the "winner", capable of fertilizing the egg, will be only one. When they are in good health (i.e. active and vital), the spermatozoa can survive inside the vaginal canal for up to 2-3 days. Therefore fertilization could also take place with intercourse in the days preceding actual ovulation.

The zygote is generated from the union between the two gametes, the cell that will first develop the embryo and then the fetus. The fertilized egg moves to the top of the uterus and nestles in its tissue, called the endometrium. Thanks to different hormones, the endometrium has undergone a series of modifications to accommodate the "product of conception". It's time for implantation.


What happens to an unfertilized egg

When you try to have a baby, despite the commitment and love you put into it, you don't always manage to achieve this magnificent result right away. An unfertilized egg dies within 24 hours. The tissue of the endometrium flakes off and then regenerates. Then the menstruation arrives and the oocyte is expelled. The cycle then begins again with all its phases: menstrual, follicular, ovulatory and luteal.

As we mentioned a little above, conception not only occurs simultaneously with ovulation, but can also occur earlier, during the so-called fertile days. Let's take a practical example on a regular cycle of 28 days (it is the most “classic” duration of cycles, but they can also be regular of 26, 27, 30 days, etc.).

Ovulation occurs around the 14th day of the cycle, but we are already fertile in the previous 3-4 days. We understand this from the symptoms of ovulation, a set of very precise signals that the body sends to tell us that yes, this is a good time to become a mom. Which ones are they? For example, the more transparent, abundant and sticky vaginal mucus, the increase in basal temperature and sexual desire.

Under favorable conditions, the spermatozoa adapt perfectly to the vaginal environment and are able to survive for a few days. This explains why gynecologists recommend having intercourse already in the days before ovulation: you may have a better chance of getting pregnant!

What is the implant

We explain what planting is, also called nesting or nesting. It indicates the moment when the product of conception (sounds strange as a name, right? At the beginning of pregnancy it says just that) lurks in the matches of the endometrium. That is, it attaches itself to the walls of the uterus, a very welcoming place where the embryo can develop.


There are three phases of the plant. During the "adhesion" the product of conception approaches the endometrium, then attaches itself to it and, finally, penetrates inside (with the so-called "invasion"), implanting itself definitively. From here, the production of beta hCG begins.

When the implant takes place

Implantation usually occurs about a week after conception. In some women it is accompanied by what is commonly called "implantation leaks", sometimes associated with abdominal pain. They are in fact small losses of blood, different from actual menstruation. In fact, bleeding is lighter, less abundant than normal menstrual flow. The color is also different: typically the losses are pink or brown, almost never bright red.

Implant losses are short-lived: they usually end after 2-3 days.

If you are wondering if conception can somehow be physically perceived, the answer is no. Unfortunately, there is no way to know if the encounter between sperm and egg has occurred and has been successful. You have to wait a while before you actually feel anything on a physical level. The first early sign of conception could be implantation losses, but not all women have.

To understand if there has been conception we should wait at least for the delay of menstruation. Eh, it's not easy to be patient when looking for a little one! But considering that there are no "symptoms of conception" you really have to wait a little longer. If you are pregnant, you will find out soon enough. The first symptoms of pregnancy will appear while the cycle will not come. Time to take a pregnancy test!

Surely the word beta hCG can only arouse beautiful emotions in each expectant mother. We are talking about the so-called "pregnancy hormone" that the body produces when gestation begins and which causes the test to become positive. The functions of beta hCG are mainly two: to stimulate the corpus luteum to produce large quantities of progesterone (very important for the engraftment of the embryo and the good continuation of pregnancy) and to activate the synthesis of proteins necessary to strengthen the walls of the uterus.

Beta hCG production begins about a week after conception. They appear first in the blood and then in the urine. So if you want to be really sure of pregnancy, do the test in the laboratory with a blood sample. It is certainly more reliable than the home one. The latter, for example, if the pregnancy is just beginning, may fail to detect beta hCG, perhaps giving a false negative that would disappoint you. The advice is not to be in too much of a hurry, even if the desire to have a baby is very strong.

During the first few weeks of pregnancy, beta hCG grows very fast, doubling every two days. It peaks around the 13th week and then decreases and remains stable until delivery.

Calculate the estimated date of delivery from conception

One of the very first things you do when you discover your pregnancy is to calculate the expected date of delivery, the day the baby should be born. This day is hardly ever respected, but it is important to have an idea of ​​when approximately one will be giving birth. Furthermore, with the confirmation of the ultrasound scans, the presumed date of delivery allows us to know if the development of the fetus is regular or not.

The most used and reliable criterion for knowing the expected date of delivery uses the first day of menstruation as a starting point for pregnancy. In reality, there are those who are sure of when the conception took place and use that as a day for the calculation. However, this method is less safe because, although you can be certain of when conception took place (for example, if you only had sexual intercourse in a month), ovulation is never very precise, particularly if you have irregular cycles.

And there is another aspect to consider. There are more than one fertile days, so conception may have occurred before ovulation.

In any case, our app Noi allows you to choose how to calculate the estimated date of delivery, whether from the first day of the last menstruation or from conception. Choose the one you prefer.

add a comment of Conception, the things to know