Cough and cold in pregnancy: remedies and medications 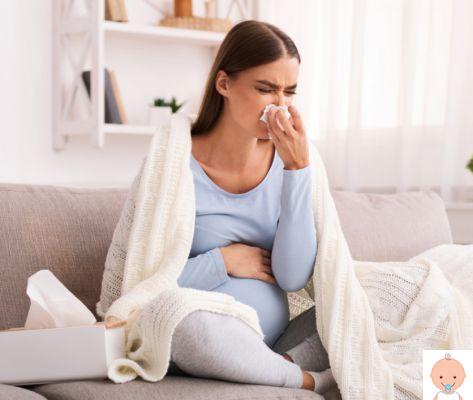 Cough and cold in pregnancy

I cold and cough symptoms are annoying and we commonly use over-the-counter medications, such as syrup or paracetamol, to relieve them. But when a woman is expecting a baby, many medicines cannot be taken: how can they be treated cough and cold in pregnancy? What do we know about the safety of cold medications during pregnancy?

Cold in pregnancy: what to take

The common cold is a very common disease: it is estimated that adults have an average of 2-3 colds per year and the chances of catching one colds during pregnancy they are higher because the immune system is more vulnerable.
Colds are usually treated with common over-the-counter drugs, but obviously during pregnancy you have to limit the intake of drugs and you should always ask your doctor for advice before taking any medicine. Let's see in more detail what the drugs most used to treat colds:

Analgesics are a category of drugs that are used to reduce pain and include the paracetamol, which is the safest analgesic and antipyretic drug in pregnancy, in all trimesters.

- non-steroidal anti-inflammatory drugs (NSAIDs) include ibuprofen, naproxen and other active ingredients, such asacetylsalicylic acid (aspirin). Experts recommend avoiding aspirin during pregnancy and naproxen and ibuprofen in the third trimester. Therefore, NSAIDs should be taken with caution and only after asking your doctor for advice.

Antihistamines can relieve runny nose, sore eyes and sneezing. It is a drug generally considered safe even in pregnancy: most over-the-counter antihistamines are safe to take during pregnancy but always after talking to your doctor.

Others natural remedies commonly used during pregnancy in case of colds and which can be considered safe are nasal sprays with saline solutions or thermal water.

The drugs to avoid are cortisone e vasocostrittori decongestionanti which are contraindicated in pregnancy.

Is a cold in pregnancy dangerous?

A cold is a very common disease, it can be annoying but there is no scientific evidence that it causes problems with fetal development.

How long does a cold last in pregnancy?

Cold it will pass spontaneously after a week / ten days. There is no real one cold cure: generally the drugs used are used to relieve symptoms that can annoy, such as runny nose, sneezing, stuffy nose. Here are some tips to better manage colds and coughs in pregnancy:

La cough it can be annoying, especially during pregnancy, but even in this case we must be careful with the remedies and drugs we use. THE cough suppressants they often contain substances such as dextromethorphan and guaifenesin which appear to be quite safe in pregnancy, as long as they are taken in the correct doses. However, even in this case, you must ask your doctor before taking these drugs and try natural remedies that are certainly safer, such as, for example:

Rhinitis gravidarum is a disorder that affects 60% of pregnant women and occurs from the third month of pregnancy with symptoms similar to those of a persistent cold. Rhinitis gravidarum is caused by the action of estrogen and progesterone which cause a hypersecretion of mucus in the nose and cause an edema of the mucous membranes, causing swelling and congestion.

Among the VIPs, many pink bows on the way ❯

add a comment of Cough and cold in pregnancy: remedies and medications