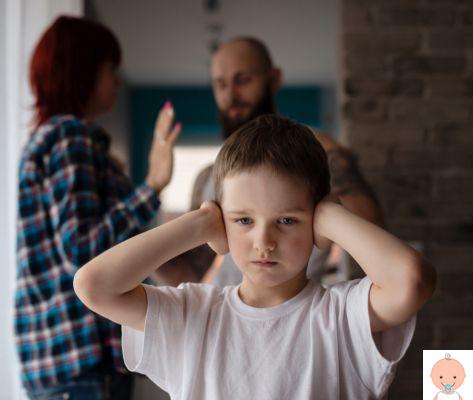 Separate yourself in the house

What consequences for the children? A fairly current theme is that of separation, of the reconstituted nuclei, of the couple conflicts for custody of children. But when two spouses break up and continue to live under the same roof, what happens?

What are the consequences on the emotional state of the children?

The separation, and the consequent divorce, between spouses is one of the most stressful events in the life of any single individual. According to "The Social Readjustement rating scale" (1967) by Holmes-Rahe, two American psychiatrists, separation from a spouse is one of the most stressful events ever in the life of an individual and on their rating scale it has a value of 65 out of 100. Added to other situations, including the change of home, lifestyle, eating habits, sexuality and so on, it can have significant consequences for psychophysical health also on those who naturally 'undergo' the separation, that is the children.

Read also: Separation, how to deal with children

Economic problems are often an obstacle to effective disunion of the two spouses who choose, on the other hand, to cohabit even if they lead two distinct lives and often with new relationships in place. This implies a persistence of the bond even though the love has ended. The bond inevitably implies dependence and this condition can turn into a not indifferent problem both in a relationship without conflicts and in one in which resentment and hostility are still expressed, despite the marriage being over. The financial aspect can ultimately be 'supported' by a series of solutions that often struggle to be proposed. So we prefer to maintain the status quo rather than propose and accept a change.


It is also true, that in many situations, the economic condition of one, or even both partners, is rather precarious and then the only plausible solution is to remain under the same roof also to provide stability for the children. Sometimes, however, it is not just the financial aspect that hinders the two from moving away but one fear of the resulting suffering. To quote Holmes and Rahe again, breaking up is not as simple as it may seem. Sometimes the separation itself, losing the other, moving away and changing one's family and habitual structure inevitably produces strong stress, anxiety, depression and in some cases a psychotic crisis may occur as happens in the pathological contexts of femicide following an abandonment.

It is therefore problematic, which is why, even if we do not get along, the bond and cohabitation remain the only chance through which we avoid suffering that is difficult to manage for all members of the family.

The dynamics of the couple relationship, the behavior between the spouses and the relationship that each of the parents establishes with the individual children are internalized and then become a behavioral and emotional model. Knowing, observing and accepting the parental model in a context of separation, in which the couple ceases to exist with its peculiarities of trust, sharing, mutual affection and eroticism has a specific message, in which the renounces affectivity, love and a healthy relationship. This exorcises the sense of loneliness which seems to be intolerable only at the thought.

But the opportunities for quarrel can arise at any time and children really risk becoming an occasion for spite, accusation, tools to claim one's rights and highlight the other's shortcomings in front of them. The separation can give rise to various discomforts first of all anxiety and depression not only in partners but also in children. If children are very young, the first symptoms that may arise are: loss of appetite, insomnia, bedwetting, difficulty concentrating, separation anxiety. If older, poor school performance, inadequate interest in daily activities, misunderstanding with one or both parents, withdrawn, anger or aggression.

It is therefore important to pay attention to any reactions caused by the new change or by the perception that they themselves have of the family that has ceased to be such. In fact, even if it has not been revealed to them, they inevitably realize it.

Couples who choose abstinence and have sex only to conceive ❯